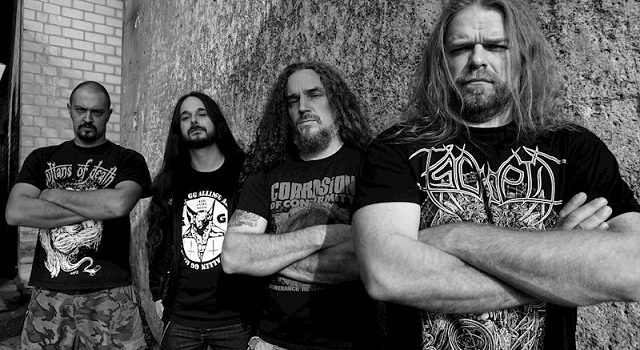 Our final installment of Rapid Fires, our short review column, for 2018, this month finds us sorting through some relatively strong releases. In a perfect world, the DR staff would be able to devote space to each and every metal (or hard rock) release, but that’s just not feasible. What is, however, is us taking a stab at the following: Ashes Collide, Beaten to Death, Deadborn (pictured), Diplegia, Fearrage, Full House Brew Crew, Geist of Trinity, Johnny Gioeli, Hate Squad, InStorm, Mourn the Light, Scarlet Aura, Seven Thorns, The Skull 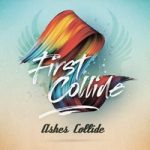 Ashes Collide – First Collide (Sliptrick)
Russian hard rock act Ashes Collide make their Sliptrick Records introduction with the EP First Collide, which is something that is probably bound to excite fans of the modern rock of the 2000s. The EP is firmly planted in said age, with some clear callbacks to bands like Incubus and Rage Against the Machine being chief among their sound. It’s catchy enough to the ear if you are a fan of that era, but doesn’t really bring it forward too much. A few more modern touches might make Ashes Collide generate a larger appeal. But for now, those wanting a bit of straight-forward rock can’t really go wrong with what they are doing.- Kyle McGinn (Ashes Collide on Facebook)

Beaten to Death – Agronomicon (Mas-Kina Recordings)
Loveable and certifiably unique Norwegian grinders Beaten to Death can usually be counted upon for a release of quirks, oddly-distorted (or not-so-distorted) guitars and melodic extremity runs, something that, as expected come up in spades on Agronomicon. Here, they volley for maniacal cuts like “Dere er herved oppløst” to their now patented grind guitar twang, like on “Gå, snuble, bli liggende.” A shame that one of the most interesting grind bands in recent memory remains largely an unknown commodity, but, that’s okay – the metal world may not be ready for quirky grind from Norway anyway. – David E. Gehlke (Beaten to Death Facebook) 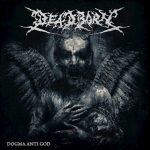 Deadborn – Dogma Anti-God (Apostasy)
Stacked with two ex-Necrophagist guys (vocalist Mario Petrović and drummer Slawomir Foltyn), Deadborn, naturally, has the technical pedigree to hang with just about anyone. On Dogma Anti-God (their first album in six years), the Germans pound down on nimble, dexterous couplings that stay on the brutal death metal range. However, unlike some of their peers, Deadborn manages to inject moments of catchiness, be it a stealth groove or frenetic opening blast run, like on the title track. Killer stuff. – David E. Gehlke (Deadborn Facebook) 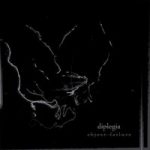 Diplegia – Abject Failure (Self-Released)
For this scribe, the upstate NY locale tends to be associated with hardcore and brutal death metal, so this depressive piece of doomy black metal was an excellent change of pace. Unlike many in this field, they don’t craft 10-minute meandering epics but get right to the point, allowing for a more accessible vibe with all of the blasting and gloomy atmosphere that you could crave. The level of blackened aggression is spot on, and allows for some nice contrast with the slower and more melodic doomy segments. It’s nothing quite ‘out of this world,’ but its thoroughly well done and polished from start to finish. – Kyle McGinn (Diplegia on Facebook) 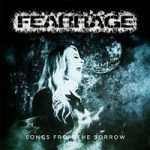 Fearrage – Songs from the Sorrow (Inverse Records)
Together since 2014, Finnish band Fearrage release their second EP in Songs from the Sorrow – a four song outing of modern thrash with groove propensities. Meaning for every Metallica reference bursting from the potent riffs and melodic transitions, there’s a bit of that fierce Pantera or Machine Head edge to the vocals and grooves. Guitarist Juha Virkamäki has a Phil Anselmo-esque raspy quality to his vocals, making “Your Demise” militant against the shapeshifting groove/thrash musical template. The guitar work has an advanced rhythm element with sophisticated transitions, giving “Only Affliction” the nod for serious neck whipping antics (or crowd shout-a-longs). A probable favorite for the younger generation. – Matt Coe (Fearrage on Facebook) 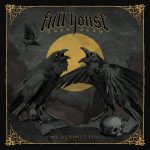 Full House Brew Crew – Me Against You (ROAR! Rock of Angels Records)
Whether it matters or not, Rotting Christ bassist Vagelis Karzis is the brains behind the oddly-named Full House Brew Crew. The dichotomy couldn’t be more apparent between the two (really stoked for the new RC album, by the way), as Full House Brew Crew takes their cues from American numb-skull rock like Five Finger Death Punch and Disturbed (with a mild Pantera influence). It’s radio-ready stuff, certainly not capable of activating one’s brain in the way that Rotting Christ does, but, if that’s how Karzis gets his kicks, then so be it. – David E. Gehlke (Full House Brew Crew Facebook) 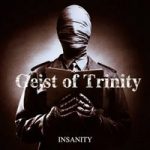 Geist of Trinity – Insanity (Self-Released)
Nothing like a little in your face, straight-up melodic death metal to get the veins pumping. That’s exactly what Japanese act Geist of Trinity delilver on their latest album – nothing more and nothing less. But for those with a real hankering for this sort of thing, they play at the heavier end of the spectrum, complete with blast beats and frantic riffing attacks. While a few ‘meh’ cleans keep it from total domination (see “Beyond the Horizon”), it’s not enough to really detract from the entire thrashy experience. – Kyle McGinn (Geist of Trinity on Facebook) 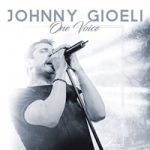 Johnny Gioeli – One Voice (Frontiers Music)
Best known in melodic hard rock/ metal circles for his work with Axel Rudi Pell, Johnny Gioeli decided to work on this solo album to reach back to his melodic rock roots. Producer/keyboardist Alessandro Del Vecchio helped assemble material and with proper backing band support, it’s clear that Johnny’s voice shines through an 80’s-oriented commercial song like “Drive” or the early Tom Petty influenced “Running” just as easily as on a Vertical Horizon-flavored “It” as well as the modern rock propelled “Hit Me Once, Hit Ya Twice”. Seasoned artists can hit the sweet spot when given all the right tools and time to execute them – it’s not metal, but should be well received by those who have loved Johnny’s work in Hardline and ARP over the decades. – Matt Coe (Johnny Gioeli on Facebook) 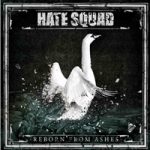 Hate Squad – Reborn from Ashes (Massacre Records)
Together for twenty-five years, German band Hate Squad sit in that crossover hardcore/thrash/groove mold for their seventh album Reborn from Ashes. Intertwining Sepultura-like groove and thrash riffs with tempos and parts that can be like Fear Factory at their heaviest one moment, or jumpy hardcore with death growls the next (Napalm Death meets Unleashed here) – it’s engaging those youthful angst buttons that keep “Death List” and “Hate Factory” moving the supporters along. Eleven songs in a tidy 39 minutes, the quintet never relinquish their aim to take no prisoners, full force ahead. Many would consider Reborn from Ashes stuck in an older philosophy – the purity and commitment though cannot be denied when executed in this proper manner. – Matt Coe (Hate Squad official website) 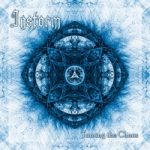 InStorm – Taming the Chaos (Metal Carnival Records)
More melodic death metal for this month’s inclusion, InStorm provide a framework that calls to mind the early days of Dark Tranquillity’s Skydancer while pushing some folky and power metal corners into the mix. Tight, neoclassical songwriting makes sure there’s plenty to keep the mind occupied while listening but the one thing that stands out is that the tracks don’t hold tight to the memory like they should. There’s plenty of energy and finesse, but for some reason it seems to fall a little flat when it comes to reflecting on the release. Taming the Chaos is enjoyable while it lasts, but lacks that charismatic flair to ultimately keep bringing you back to it regularly. – Kyle McGinn (InStorm on Facebook) 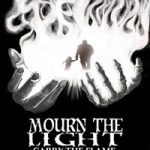 Mourn the Light – Carry the Flame (Self-Released)
The first insight into the next full-length album for CT band Mourn the Light, “Carry the Flame” delivers eight minutes and thirty-three seconds of traditional heavy metal meets doom in an epic ballad format. Between the varied clean to electric guitar passages from Dwayne Eldredge and the understated but potent bass delivery of Jorge Vargas, it’s easy to imagine people swaying and singing along to these lyrics as they gain comfort from the quartet’s love of older NWOBHM and bands like Candlemass, Trouble, and Solitude Aeturnus. Establishing credibility, knowledge and solid composition/execution skills for a relatively new band, the future burns bright for Mourn the Light. – Matt Coe (Mourn the Light on Facebook) 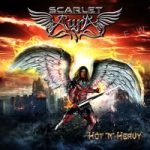 Scarlet Aura – Hot ‘N’ Heavy (Sliptrick)
While the album title might make one steer clear due to the ’80s/’jock rock’ sound to it, Scarlet Aura provide a symphonic/power metal experience that is consistently strong. Some gruff traditional metal and even hard rock feelings also make their way through the speakers, and vocalist Aura Danciulescu has a Doro-esque flair albeit with a bit more grittiness to it. It all comes together to make a release that doesn’t go by the traditional ‘female-fronted’ rulebook, and stands out with some real character. There’s some real potential here as the band continues to develop. – Kyle McGinn (Scarlet Aura official website) 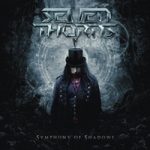 Seven Thorns – Symphony of Shadows (Mighty Music)
An off and on entity since 1998, Danish power metal band Seven Thorns return with Symphony of Shadows, their fourth full-length and first in five years. A new bassist and vocalist enter the fold since the last record – but this is pretty standard European melodic power metal with that flashy guitar/keyboard flair and mid-range snarl to high vocal acrobatics (think a less polished Graham Bonnet) that galvanizes the hordes into fantasy warrior battles. Especially when you take in material like “Black Fortress” and “Virtual Supremacy” – although the band occasionally reference a traditional, Iron Savior or progressive Royal Hunt vibe against their normal Gamma Ray/Stratovarius proclivities. Decent yet fairly predictable – Seven Thorns adhere to the power credo of bombast double kick and ivory orchestral supplementation beyond the expected electric output. – Matt Coe (Seven Thorns official website) 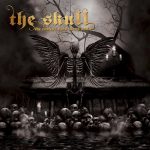 The Skull – The Endless Road Turns Dark (Tee Pee Records)
Eric Wagner, he of Trouble fame, is making the most of the back-end of his career. Aside from The Skull, he’s also doing time in the more psychedelic Blackfinger, easily outdoing his former Trouble bandmates in the productivity department. As for The Skull, it’s akin to classic Trouble, with Wagner getting down with dirty and grim riffs – the type that are produced to shake off hangovers, or, rather, start the whole process at the bar. Aside from punchy bangers like the opening title track, watch for “From Myself Depart.” Total Wagner soul. – David E. Gehlke (The Skull Facebook)