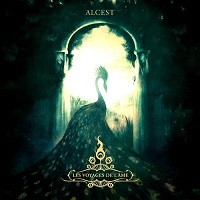 Easy to see why Alcest has gone from one of the underground’s best kept secrets to the brink of high-level billing. These kind of things will happen when a.) you’re original; and b.) there’s substance to what you do, both traits Alcest mainman Neige has in spades. And so Les Voyages de l’Âme (“Journeys of the soul”), the follow-up to 2010’s gleaming Écailles de Lune is the next bold move for Neige, coming across as every bit as rich as its Souvenirs d’un autre monde debut, which in French terms, is “magnifique.” And so is Les Voyages.

Whereas 2010’s Écailles de Lune was lopsided and hindered by a lull in its middle tracks, Les Voyages is easily more well-rounded. Designed to be a cinematic journey, Neige has effectively filled in the empty spaces with virtually every color of the sonic rainbow. There’s an equal breadth of despair-ridden tracks and joyful, sunny day journeys, showing that Neige’s palette and wide-range of tastes (after all, the Frenchman did get his start in the black metal scene) is as far-reaching as anyone’s in metal.

Effusive praise aside, it’s easy to get a handle on the opening “Autre Temps,” which is the band’s first attempt at a pure single. Accompanied by a gorgeous video, “Autre Temps” is a gentle spring of Neige’s soft and fuzzy penchant for melody, driven home by his tender French tenor in the chorus. From there, the album gets its wings via the darker-tinged “Là où Naissent les Couleurs Nouvelles,” title track, and “Nous Sommes l’ Emeraude,” a trio of songs

that gives the LP a sizeable girth that wasn’t as present on its predecessor. It’s in these tracks where Neige’s imitable riff selection and atmospheric arrangements find the hard-to-find cross-selection between shoegaze rock and quasi-black metal.

The bright “Beings of Light” and “Havens” serve as the counterpart to the fleeting moments of darkness that ultimately come to define Les Voyages de l’Âme. The rich tapestry of this album might strike some as being too dream-like and frilly, as Neige’s world comprised of childhood out-of-body experiences comes to life. It’s in these maneuvers that Alcest proves just how valuable

of a commodity they are. And when you really get down to it, there are few, if any entities like Alcest in metal. At the present time, they’re the supreme atmospheric metal band. There are no two ways about it.