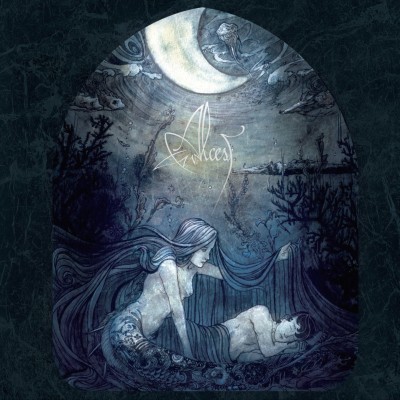 High on the “most anticipated” list for this scribe and several others who were awestruck by the majesty that was 2007’s Souvenirs d’un autre monde, Alcest’s newest Écailles de Lune arrives with a new-found set of expectations, ones that just weren’t there last time around. Following up a career (and subgenre) milestone is a high mountain to climb and frankly, it would have taken a Herculean performance to top Souvenirs d’un autre monde. This doesn’t come close, but we’ll take it.

Characterizing the Alcest sound would fall somewhere between the unbridled optimism of shoe-gaze pop coupled with wishy-washy black metal overtones. What made Souvenirs… so captivating was the sense of optimism offset by the harsh realities of somber black metal. It’s a strange beast, although mainman Niege has a distinct knack for coalescing various moods into one sonic platform.

On Écailles de Lune, the optimism is tempered with a spate of hardened black metal sojourns, although that doesn’t stop the first half of “Écailles de Lune Part 1” from being the monumental high point of the album. The song

is overflowing with glorious melodies and Neie’s wistful vocals, eventually decaying into a grim black metal landscape. “Écailles de Lune Part 2” follows suit in the dark department, employing a barrage of black metal advances that come as a bit of a surprise.

Album centerpiece “Percées De Lumière” brandishes the type of hopelessness unearthed on Niege’s complementary Amesoeurs project. It does, however, cover up for the clunker that is “Solar Song,” an ill-conceived attempt at bringing back the poppy elements into Alcest’s sound. Album closer “Sur L’Océan Couleur De Fer” is a dramatic, hushed, devoid-of-drums number that closes out Écailles de Lune on a reflective, morose note.

Coming off one of the most revelatory (yes, revelatory) pieces of work in last 10 years, perhaps Écailles de Lune’s dark reverberations serve as a counterpoint to the joy and hope of Souvenirs d’un autre monde. This is something we’ll have to pick Neige’s brain on. For now, let us continue to let Écailles de Lune to work its way into the stratosphere and revel in Souvenirs d’un autre monde.