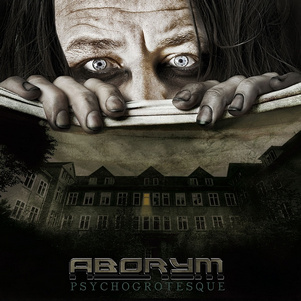 Like Red Harvest and Tidfall, both of whom could never manage to make cyber black metal click, Aborym has also suffered from the same indignity, even as the Italians truck in and out various “stars” from the black metal scene including dudes that are now doing time or have done time in Mayhem, Watain, Emperor and the long-defunct Dissection. Their 1999 debut Kali Yuga Bizarre carried some weight, probably because it’s the album that leaned the least in the cyber/industrial direction (“Roma Divina Urbs” is a killer song), but progressively, they’ve sunken deeper into an industrial wasteland, culminating with Pyschogrotesque, their first album in four years.

Going the easy route by numbering the songs I-X (gotta love Roman numerals), Aborym is able to create a divisive, cold landscape almost right off the bat with opening noise cut “Pyschogrotesque I” and “Pyschogrotesque II.” Drummer Bard Faust (formerly of Emperor, noted murderer) does lend some heavy-handed blast beats, although his kit sound awfully synthetic an unnatural at times, which is probably on purpose.

When Aborym decides to go the futuristic, Prodigy-like route like on “Pyschogrotesque III,” it’s where the black metal sheen wears off. The same bodes for “Pyschogrotesque VI,” a song that taps into a wide array of sounds, including a saxophone solo and overly-processed keyboards, making it the clear-cut detour song of the album, although the techno breakdown at the tail-end of “Pyschogrotesque VII” is another head-scratcher.

Not sure if cyber black metal and its variation incarnations will ever make the cut. There’s simply no weight to it, and when it’s off (like on Pyschogrotesque), things get really messy, and really messy fast. For a band that has been able to pull in so many high-profile faces from the BM scene, one has to wonder what the allure with Aborym is…