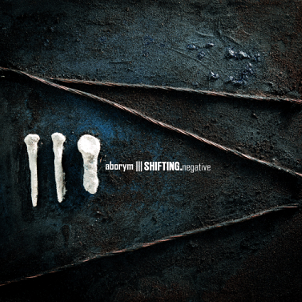 A permanent thorn in the side of the black metal establishment, Italy’s Aborym have been one of the few bands able to adopt industrial sounds and maintain their credibility. 2013’s Dirty may be the best example of this, an urban, desolate affair that fronted the band’s innate weirdness with a wide array of extremity. If we want to go a few albums back, 2001’s Fire Walk with Us and 2003’s With No Human Intervention also wielded a cold, mechanical take on black metal, all the while engaging in mechanized, futurist sounds. It appears with Shifting.negative, Aborym have finally taken the full industrial music bait and have failed in the process.

Figurehead/founding member Fabban has completely overhauled the Aboyrm lineup for the album. Whether it had much of an impact remains to be seen since Fabban is the band’s primary composer, but nonetheless, the once-authoritative sounds that brought Aborym into view are by and large absent here. Rare are the heavy moments, instead replaced by dumb power chords and an abundance of sounds, samples, splitting, and stalled vocals. For a relative comparison, it’s as if Fabban and crew (the album features an endless list of guest appearances, too) shuttled back to the commercial industrial music wasteland of the ’90s, doing their best to become Nine Inch Nails. Indeed Nine Inch Nails this is not, but the album a misguided attempt at a full break-away from a band’s core sound.

It’s of little use that Aborym has constantly shifted (excuse the pun) styles from album-to-album. That was to be expected, but, Shifting.negative is so dry and aimless that you’d almost wonder if Fabban would have been better off renaming Aborym altogether. That’s the kind of album this is.