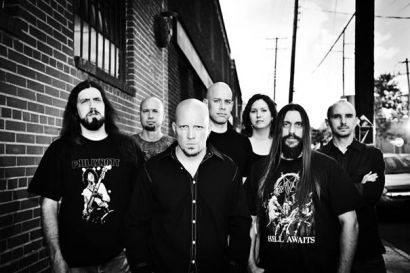 After two years in pre-production, Virginia-based epic metal band WHILE HEAVEN WEPT has entered the studio to begin recording the first of two brand new albums, entitled Suspended At Aphelion, for a late 2014 release via Nuclear Blast Records.

Founding guitarist and primary composer Tom Phillips provides more insight into what is clearly the single greatest work of the band’s career so far: “If (2011’s) Fear Of Infinity was our Caress Of Steel, Suspended At Aphelion is without question our ‘2112’ — and anyone familiar with the stories behind those RUSH albums will understand that where we’re coming from is very similar, both musically and circumstantially.

“Suspended At Aphelion is the culmination of 25 years and embodies everything that WHILE HEAVEN WEPT has ever represented — yet so much more; it’s everything we’ve got to give in our hearts and souls. The album really is, quite simply, the greatest EPIC in our canon in that it is a single, 40-plus-minute monolith divided into 11 parts — in the tradition of the aforementioned ‘2112’ and our own ‘The Furthest Shore’, ‘Finality’ and ‘Thus With A Kiss I Die’, amongst others. Yet, musically… while clearly this is WHILE HEAVEN WEPT… it’s very much beyond anything else we’ve ever done… VERY progressive, but in a harmonic sense more than the technical.

“The bottom line is, if you enjoyed those aforementioned ‘mini-epics’ — or the Vast Oceans Lachrymose album, for that matter — then this is the elevation and evolution several years beyond those. We’ve approached this one as if it were to be our last — so again, it’s everything we’ve got!”

While the Fear Of Infinity lineup remains intact, the recording will feature some additional highly esteemed musicians, including the extraordinary drummer Mark Zonder of FATES WARNING and WARLORD fame, as well as world-renowned classical guitarist Christopher Ladd, whom Tom has known since childhood. Both will be performing throughout the entire album and more details regarding their involvement will follow in forthcoming press releases.

WHILE HEAVEN WEPT has once again aligned with Gustavo Sazes for the cover art — the man responsible for the stunning Fear Of Infinity cover, and Kevin 131 — engineer and co-producer of the Of Empires Forlorn album from 2003.

Tom says: “The team we have assembled to realize this mammoth work is nothing short of incredible, and I cannot think of a better way to commemorate a quarter of a century of WHILE HEAVEN WEPT than to release the definitive statement of the band. Prepare yourselves for an epic journey far beyond anything you’ve ever known from us!”

Lead singer Rain Irving adds: “Never before, have I been so proud to be associated with a musical endeavor. No disrespect to any of our works in the past, but this one is special and worth every ounce of excitement I feel inside. This is the kind of record that will allow me to ‘rest peacefully,’ if you will, the day I decide I’m done with my career.”