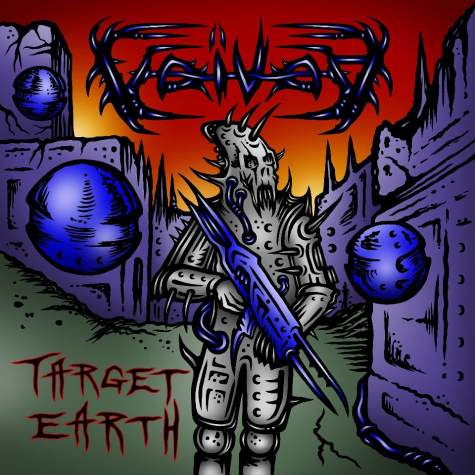 Canadian progressive metal pioneers VOIVOD have completed the video for their Century Media debut album, Target Earth, and is available for viewing below. The video, created by Italian filmmaker and multimedia artist, Nicola Piovesan, was created with 3D Motion Graphics using the visions and artwork of VOIVOD drummer, Away (Michel Langevin).

VOIVOD drummer Away comments, “I met Nicola Piovesan at the VOIVOD/UNKIND show in Helsinki on October 31, 2012. We had a discussion about my 3D Graphics for the album Negatron and Nicola mentioned the possibility of him doing a 3D Motion video for our new album Target Earth. After viewing his fantastic video for THE CORE by the band ON|OFF|MAN, we knew he was the right person to capture the cyber world of VOIVOD. To us, the result is simply spectacular!”

VOIVOD’s latest album sold roughly 1,500 copies in the US during its first week of release earlier this year. VOIVOD’s predecessor album, Infini, opened with around 840 units back in July 2009. Target Earth was recorded in early 2012 at Pierre Rémillard’s (CRYPTOPSY, KRISIUN, MISERY INDEX) Wild Studio in St-Zénon, Quebec, Canada and was mixed by CORRECTIONS HOUSE member, Sanford Parker (PELICAN, NACHTMYSTIUM). The follow-up to 2009′s “Infini” contains the band’s first music to be written with guitarist Dan Mongrain (MARTYR) following the passing of original axeman Denis “Piggy” D’Amour in 2005. The original art was once again drawn up by drummer Langevin and features color schemes from each of the band’s previous albums.