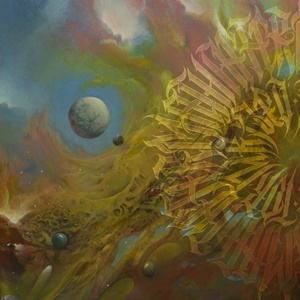 Artwork can paint a visual montage that gives insight into what music listeners can expect when checking into a release. In the case of German act Torturized, the stunning array of colors and images set in this ethereal montage that Brazilian artist Cauê Piloto provides for their third studio album Aftermath mirrors the aural versatility present within the progressive death material on display. Gather the troops as these musicians throw down all the proverbial brutality and musicianship one can hope for in this style, plus the dynamic, atmospheric or circular yet serene shifts that keep ears pinned for the next titanic heavy riff or roar.

Expect guitar riffing that is fast and furious along with drum kit work that moves from pummeling blast beats to relatively controlled tempos which shift in small windows, plus the tradeoff demonic bellows to face melting screams necessary for efficient death appeal. An occasional use of hypnotic keyboard strains appears against ambient guitar harmonies that give a white washing swirl nature to highlight “Inversion”, the drums shifting in a rollercoaster low to high gear mannerism. Torturized also gain the benefit of a fluid, progressive bass play that rises to the spotlight – especially during angular tracks such as the Voivod meets Cattle Decapitation-like “Ecocide” and the outer universe instrumental “Insomnia”. Even some lower doom chugging creates this down-tuned hypnotic effectiveness during “Maelstrom”, the slight djent-like transition still progressive as well as catchy to become a mid-album favorite a la Rivers of Nihil. The record closes with the title cut – a sprawling seven-minute plus effort that contains tremolo aspects, another slower doom crawl passage worthy of many windmills, and killer melodic death twists plus inhuman BPM measures that cohesively make sense.

Hard to believe this quintet has been together since 2001 and only now finally secured a record deal with Aftermath – as this is the type of material that usually hits a lot of critical acclaim / best of lists by year’s end. Exciting, intriguing, worthy of multiple, intense playbacks – Torturized gives a European musical twist to progressive death metal to come up aces high here.