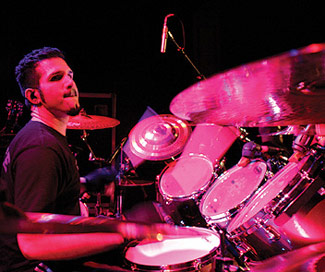 Video footage of ANTHRAX drummer Charlie Benante working on some “new drum fills” can be viewed below. As previously reported, ANTHRAX has seven songs written and arranged for their next studio album, which is due some time in 2014.

Guitarist Scott Ian stated: “Charlie, Frankie and I are working hard at new ANTHRAX. We’ve had a couple of writing sessions and things are moving along well, fast for us actually. We’ve got 7 songs arranged musically and we’re getting together again in a week and a half. The new stuff is aggressive, fast, even riff-ier than the last record and some of it is difficult to play. Nothing like writing parts that are above my ability as a guitar player! When that happens the drill sergeant in my brain yells “PRACTICE YOU LAZY FUCK!” So I do. And I nail that shit.

I’m just getting into lyrics, song titles, nothing to talk about yet.”