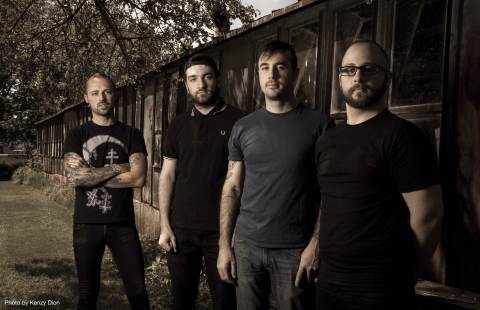 After releasing a self-titled EP last year to critical acclaim, New Hampshire’s VATTNET VISKAR is now ready to unleash its debut full-length album, Sky Swallower unto the masses this fall via Century Media Records. Slated for release on September 3 in North America, the CD was recorded at Universal Noise Storage with producer Brett Boland and features eight tracks of crushing, blackened doom metal.

Formed in the fall of 2010, the band has quickly risen amongst the ranks of U.S. black metal acts with the aforementioned EP.  Having already shared the stage with such titans as INQUISITION and WOODS OF YPRES, they have left their mark throughout the U.S. with a seemingly endless string of shows, including a stop at last year’s SXSW festival, playing three shows throughout the event. VATTNET VISKAR will play Sky Swallower in its entirely on all of their upcoming tour dates which can be seen below.