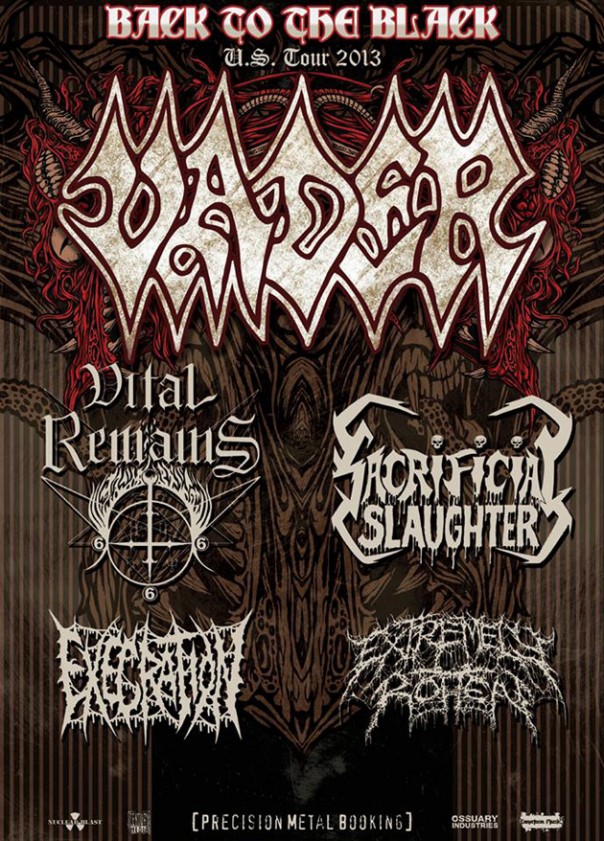 Don’t forget your ear plugs this Fall, it’s going to be a heavy one! VADER have just revealed a series of headlining US tour dates with VITAL REMAINS, SACRIFICIAL SLAUGHTER, EXECRATION and EXTREMELY ROTTEN. The tour is set to kick off on September 6 in Santa Ana, CA and wraps up in Hollywood, CA on September 29. More dates are rumoured to come but for now, check out the confirmed dates below.

Polish death metallers VADER recently booked studio time in November to begin recording their new album which slated for an early 2014 release. Songtitles set to appear on the CD include “Abandon All Hope”, “Bring Them To Me” and “Infernal Poetry.”

VADER’s latest effort, Welcome To The Morbid Reich was released in Europe on August 2011 and in North America in September 2011 through Nuclear Blast Records. Recorded at Hertz Studio in Bialystok, Poland, the album features the cover artwork of Zbigniew Bielak (DESTRÖYER 666, WATAIN) and contains 12 brutal songs which were mixed and mastered in May 2011.