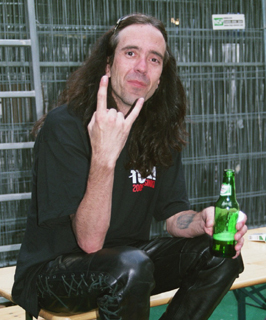 Bay Area thrash legends TESTAMENT have announced the departure of long-time bassist Greg Christian. A statement from the band is as follows:

“It is with much respect that we announce our mutual parting with bassist Greg Christian. Metal fretless bass pioneer Steve DiGiorgio will be returning to TESTAMENT. Steve previously was a member of TESTAMENT on The Gathering (1999) as well as First Strike Still Deadly (2001). He will be joining TESTAMENT on their upcoming shows in Australia on the Soundwave Festival, Japan and Mexico City. Steve will also be taking part in the new TESTAMENT album. We are looking forward to continuing the momentum you, the fans, have made possible.”

Christian was forced to leave the band’s North American tour with LAMB OF GOD and KILLSWITCH ENGAGE in November for “personal reasons.” Filling in for him was EXODUS bassist Jack Gibson.

The band’s Dark Roots of Thrash DVD was released this past October via Nuclear Blast Records.