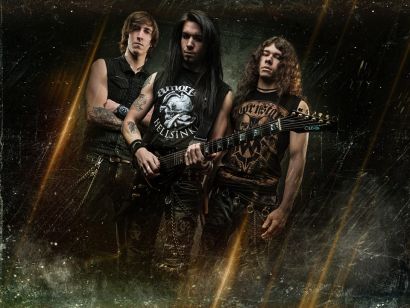 Singer/Guitarist Parker Jameson comments: “Check our new video for ‘Sword, Spear, Blood, Fire’. We thought it’d be cool to release this video now, in April of 2014, to commemorate the one year anniversary of Fires Of Life being released.

Additionally, we are excited to announce that we will be entering Electrowerks Studio with producer, Chuck Macak (OCEANO, LETLIVE) this May to begin recording the next Starkill album. With most of the pre-production already done, we can say that this new material is our darkest and strongest to date. We’ve really found and nailed our signature style on this album. We can’t wait to share it with the world. In the meantime, enjoy the new video, and keep an eye out for new updates!”

Fires Of Life was released on April 30th, 2013 to much acclaim and since then they have toured the world with bands such as WINTERSUN, TURISAS, AMORPHIS, FLESHGOD APHCALYPSE and KRISIUN. Expect a fall 2014 release for their next album as well as continued touring.