Thursday, 9th May 2019 By Katarina McGinn 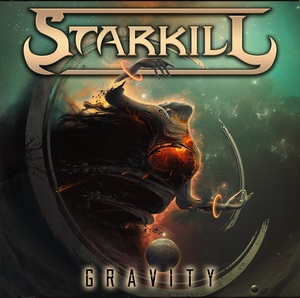 Going back and listening to Starkill’s first album, Fires of Life, it’s hard to imagine the trajectory that they would take with each successive album – leading to their fourth release, Gravity. But in listening to each album that follows, it can be assured that Starkill are confident in themselves and are willing to take some risks in order to follow the direction of their music. They aren’t content to continue writing the same album each time around. Gravity may be polarizing to some, but it also showcases their best work to date.

Given the more melodic direction of Shadow Sleep three years ago, it probably isn’t a surprise that they have continued to dabble further into these waters. But the way that they have expanded that notion and amped up the contrasts is what makes it truly exciting. The vocalist trio, which now includes a full-time Sarah Lynn Collier, makes for quite a bit of versatility (especially when they all contribute clean and harsh vocals), and nestles in quite nicely with the traditional, flashy Starkill riffwork and energetic presence of the music. “Castaway” and “Emerge” take some absolutely massive riffs (and upfront growls) and flesh them out with interesting and epic synth contributions, as well as impressively catchy melodies from both the instrumentation and vocals. The use of throttling, thrashy rhythms on tracks like “Manufactured Bliss” and “Until We Fall” offer some really striking contrasts with jumps into more melodic directions. Some songs take it even farther, with surprising success. The upbeat near pop-punk vibes found in “Fly With Me” are all but guaranteed to get you moving and then they hit you with a big, mid-tempo riff later on. The bouncy and bombastic, hook-infested waters of “Lost to Time” affixes some Dimmu-esque tones and rolling grooves at points to shift the track into a must-listen in the way it takes shape.

But underneath it all, the melodic death riffage and anthemic solos still have that edge to them that is easily recognizable as Starkill. Collier takes the lead vocal on opener “Detonate,” but the galloping, intense riffs and upbeat tempo lock it firmly into the band’s wheelhouse. Likewise, the vocal-driven nature of “Not Alone” features more than its fair share of shred to satisfy some long-time fans of the act. Closer “The Real Enemy” has some of the most powerful and upfront synths the band has done, but hammering riffs and occasional blastbeats hold down the track’s foundation.

It goes without say that Starkill has changed a bit radically with their past two albums, but these changes have given them much more identity as a band. It seems they have really hit their creative stride, and Gravity is a breath of fresh air in a scene all too happy to coast upon the flames of the past. Starkill aren’t afraid to push boundaries, and if listeners are ready to take the journey with them, Gravity will provide a genuinely enjoyable ride that breaks new ground while staying true to the band’s musical core.