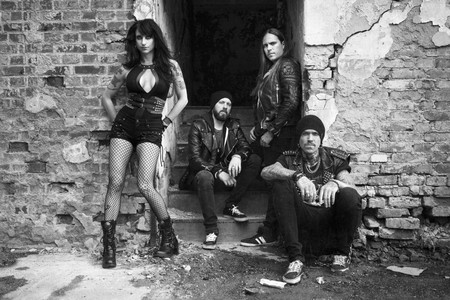 Swedish heavy rockers SISTER SIN have released the video for “Desert Queen,” which comes from their 2014 album, Black Lotus.

“We took a bit of inspiration from ancient times and aimed for a darker feeling in this video,” explains SISTER SIN guitarist Jimmy Hiltula.

“Since the song has a dark feel to it yet is very melodic, we wanted to capture that along with having the Desert Queen character in it. Also, we wanted to take some focus off the band and give more room for [singer] Liv [Jagrell] portraying this gypsy kind of woman, reading cards and being enigmatic.”

Adds Hiltula: “The desert shots were absolutely crucial for the whole video and 11 Frames (producer) did an awesome job with these beautiful pictures. We couldn’t be more excited about this video! We have all met the Desert Queen in our lives (or eventually will). The mystery lies beyond.”