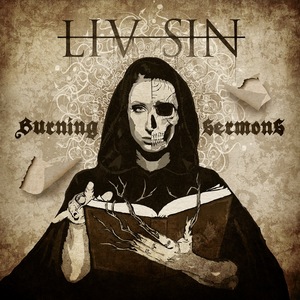 Liv Sin premiered back in 2017 with Follow Me, and has been pretty prolific since. There was a single release, as well as an acoustic EP last year, and we have now reached the second full-length in the form of Burning Sermons. Not content to simply rehash what they’ve already accomplished (and Liv herself with her time in Sister Sin), the sophomore effort sees them testing out some new waters to great effect.

The changes won’t be to the point of abrasion with those who enjoyed Follow Me, but they should nonetheless be noticeable. While the traditional metal base that coated the debut is still ever-present (check out the already available “Slave to the Machine” as ample proof of that), there’s a more modern vibe to the material. It’s notably a little heavier and aggressive as well, which is a definite boost to the act in terms of separating them from other like-minded acts with a hand in traditional metal. There’s some galloping thrash sections to “War Antidote” and “Chapter of the Witch,” and opener “Blood Moon Fever” shows a nice balance of more modern tactics (particularly in the gallant guitar melodies) and grooves with some traditional metal oomph. This culminates with “Hope Begins to Fade,” which includes some growls (and cleans) from Bjorn Strid without feeling out of place. At the center of all of this, much like the debut, is Liv Jagrell’s vocals. Just as furious as ever, she belts out some potent choruses, such as the punchy “The Sinner,” without a hint of pop overtones. Her energy is pure metal, and she puts on an ear-catching performance from start to finish, from raw fury to more melodic territory in “Ghost in the Dark.”

An excellent integration of some heavier elements make Burning Sermons a top shelf effort from Liv Sin. It’s got all of the melodies that you could ask for, and delivers them in a way that’s more energetic and thrashy than their contemporaries.