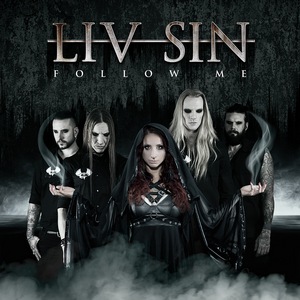 With the sudden loss of Sister Sin back in 2015, many wondered what would happen to the rising act – particularly that of frontwoman Liv Jagrell. Thankfully, she has returned with a new band behind her in Liv Sin, pitting her as the clear leader of the act. Follow Me (re)introduces fans to the unique singer in a way that’s going to please Sister Sin followers as well as open the doors for many fresh faces.

The first immediately noticeable thing about Follow Me is how much heavier it feels than Sister Sin’s material. Sister Sin was no push-over by any means, but the vibe here is much more rooted in traditional heavy metal, and takes some jumps towards the extreme end on occasion in terms of the guitarwork. Some leanings towards melodic death metal and thrash excellently complement Jagrell’s vocals, as the rollicking opener “The Fall” rapidly exemplifies and has that compulsion to it in the chorus that you’ll want to simply crank it and toss the horns in the air. As strong and potent as her vocals continue to be, don’t think for a second that this is merely a “solo effort.” Guitarist Patrick Ankermark’s riffs, melodies, and catchy leads are just as memorable and hooky as the vocal lines on “Killing Ourselves to Live,” the thunderous drum pound on “Emperor of Chaos,” and bassist Tommie Winther rumbles some bouncy basslines in “Godless Utopia.” A wide variety of tracks benefits the album, with melodic numbers like “Endless Roads” and “The Beast Within” to the groovier “I’m Your Sin” and wisely-chosen first single “Let Me Out” being the only real visible link to Jagrell’s past. The dynamics keep it interesting and the tone gives it a classic yet modern feel that should prove to be a winning combination.

A strong out of the gate debut and a welcome return from Jagrell. It’s punchy, it’s melodic, and decidedly heavy at times. A classy way to move forward without abandoning where you came from. One thing is for sure – when Liv shouts “Follow me,” there will be very few that won’t get in line.