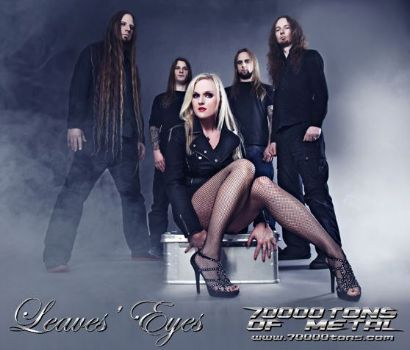 The Liv Kristine-fronted  LEAVES’ EYES have now been confirmed to perform on the 2014 edition of the 70,000 Tons of Metal cruise. The cruise is set for sail January 27 to January 2013, 2014.  Other bands confirmed for the event include DARK TRANQUILLITY, DEATH ANGEL, FEAR FACTORY, FINNTROLL, OVERKILL, SEPTIC FLESH, SOILWORK, and SYMPHONY X.

Are you ready for round 4 of The Original Heavy Metal Cruise? Imagine starting the year in style: In January 2014, 40 heavy metal bands and 2,000 fans from all over the world will travel once again to the Caribbean for a 5 day and 4 night trip of a lifetime… however, this will be the last time we are taking over the luxury cruise ship Majesty Of The Seas.

Make no mistake, this is not one of the cruises where you share the ship with regular cruise guests… and don’t get intimidated by copy-cats! Unlike others we remove the seats in the theater, or do you like seated heavy metal shows? This is 70000 Tons Of Metal, The World’s Biggest Heavy Metal Cruise, featuring the biggest Open Air Stage to sail the open seas!

Enjoy unrestricted festival access to all live shows on board, metal karaoke until sunrise, the All-Star Jam, clinics, work-shops, our infamous Belly Flop Contest, bars that never close, two full days at sea and the opportunity to mingle side-by-side with the artists in this incredibly fan-friendly scenario that has no comparison. It’s like everyone has a backstage pass!

And now get this… if you become a ticketed passenger before July 27th, 2013 you will be able to vote for the Caribbean dream destination we will be sailing The Majesty Of The Seas to one last time! More information on the voting procedure and the destinations to choose from will be announced… soon!”

For more official cruise information, head over to 70000tons.com.