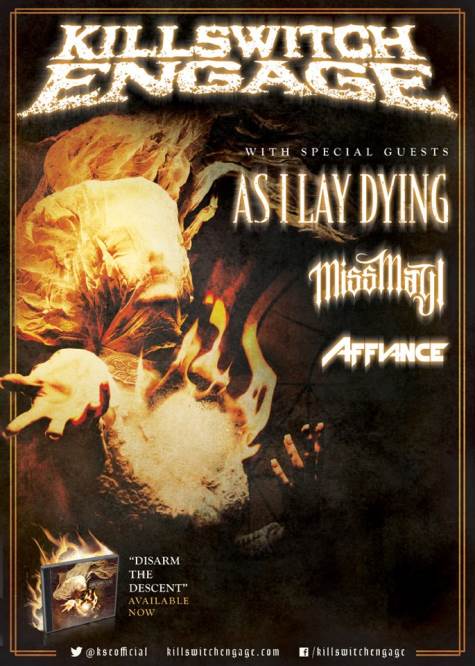 For the second consecutive album, KILLSWITCH ENGAGE has cracked the Billboard Top 10, this time with their new Disarm the Descent album. The album moved roughly 48,000 copies in its first week of release; it’s 2009 self-titled predecessor shifted 58,000 units.

While the band is at it, they’ve announced a headlining North American tour with AS I LAY DYING, MISS MAY I, and AFFIANCE in support. Ticket sales begin later this week; either April 12 or April 13.

“Everyone in the KILLSWITCH family is excited to get out on our first U.S. headlining tour in support of our new record,” singer Jesse Leach said. “We are hitting some great cities and have a great mix of songs from every era of KILLSWITCH as well as, of course, a handful of new ones.”

Leach continued: “We look forward to sharing this tour with our old friends and brothers in metal AS I LAY DYING. I personally have never had the chance to tour with them and I am looking forward to having such a quality band out with us to give this tour even more fire! We will also be joined by a talented and up-and-coming band MISS MAY I and a new band we’re all excited to see live called AFFIANCE. Thanks to all the U.S. fans for your support! Our live show will be full-on energy with all of us ready to take this to a whole new level.”

Bassist Mike D’Antonio concurred, saying, “We are super excited to be back out with our good buds in AS I LAY DYING! They are some of our favorite dudes to hang with on the road, so assumptions are high that utter chaos shall ensue. There will be so much metal riffage — you could build your own Carnival Cruse Ship. That’s right, ‘CHUGGA CHUGGA Paralysis’ is surely imminent.”