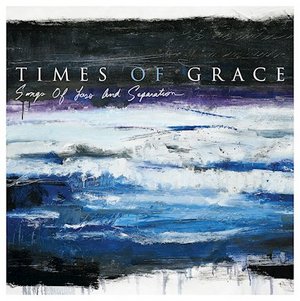 Ten years ago, Times of Grace released their debut album, which offered the first collaboration between Adam Dutkiewicz and Jesse Leach since Leach had initially left Killswitch Engage. It offered a different sort of sound than Killswitch, one that felt more mature and exploratory. It ultimately led to Leach rejoining Killswitch Engage the following year, and Times of Grace went on hiatus. But last year, some social media hints started pointing to some new material for the band, and Songs of Loss and Separation serves as a 10 year celebration of their debut and finds the band with a lot of creative juices flowing.

Songs of Loss and Separation’s greatest strength is the malleability it has, while keeping one consistent theme at the forefront: melancholy. This is a gloomy and dark album, but the way that it moves from heavier tracks to more melodic and gentle ones allows the album some breathing room in addition to providing a diverse base for them to stand on. On the heavier side of things, you have cuts like “Medusa” and “Rescue.” The former having a crushing weight to the riffing and depressive vibe (with some slight nods to the Leach-led Seamless) and the latter feeling the most like a Killswitch track if it was taken in a more bleak direction. On the other hand is the downtrodden yet surprisingly catchy “Mend You,” with a poignant chorus and just the right amount of heaviness underneath (particularly towards the end). “Cold” is the album’s most gentle cut, a beautiful ballad that pours out the emotions without being trite or cliché. There’s a lot of middle ground too, from the doomy, dragging riffs of “Currents” to the slow burn and intensity building closer “Forever.” Essentially, there’s been a lot of work done on these tracks to make each one have some solid points to separate themselves from the rest.

Full of grief and sorrow presented through a variety of metal-driven constructs, Songs of Loss and Separation is a bleak yet highly memorable experience. The return of Times of Grace is a welcome one, and the unique blend of flavors ensures the band’s identity never steers too far into Killswitch territory while still providing fans of said act with a different experience to enjoy and savor.