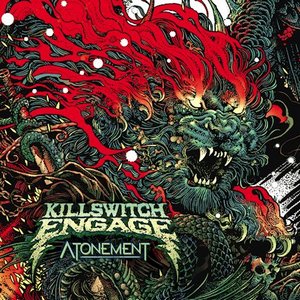 When it comes to the straight-up metalcore blueprint, one can argue that even with 17 years since the success of Alive or Just Breathing, no one can top Killswitch Engage. The band itself has persevered, after giving birth to a slew of sound-alikes and the toppling of the metalcore genre itself. Some releases have been stronger than others, but they’ve hit a consistent stride where you could know what to expect. Atonement may not radically alter the format, but there’s a fresh injection of passion and power that make it one of the strongest releases in the band’s discography.

No one is going to be surprised by the fact that the mid-tempo chugs with flowing Gothenburg-esque melodies, along with the shout/sung choruses continue to have their place all over the album. But where Atonement shines is in the presentation itself, and an uptick in the thrash quotient in a number of tracks. As the opener and a lead single, “Unleashed” does its job of re-introducing the band’s classic formula for success. An enjoyable track, but its follow-ups serve to aid in some more diversity. “The Signal Fire” packs a sonic punch from the get-go with frantic riffs and low growls. The duet with former vocalist Howard Jones is an effective use of both singers (and a solid callback to The End of Heartache’s “Take this Oath” duet). A few more surprising scorchers can be found later with tracks “As Sure as the Sun Will Rise,” the appropriately “Ravenous,” the Chuck Billy-assisted “The Crownless King,” and riotous closer “Bite the Hand that Feeds,” for those looking for a higher injection of thrash and potent energy.

Killswitch has always been just as much about heart as heaviness, and there’s also plenty to dive into here. Whether it’s the galloping early In Flames-esque melody channeling of “Us Against the World” or a poignant ballad-y number like “I Am Broken Too” (also showcasing some of the band’s strongest lyrics), the band has lost none of their genuinely emotive touch. Something that “I Can’t Be the Only One” nails at the end of the album, with an upbeat tone and an entirely infectious chorus. It’s really that Killswitch Engage magic that takes a song like “Take Control” and elevates it with the contrast of heart with crunchy grooves. Jesse Leach’s vocals should get some accolades this time around, as the consistent high standard is there, but feels more impressive knowing the vocal cord surgery that took place between albums.

More than simply just giving fans what they want to hear (something that could be argued for Incarnate), Atonement sees that creative spark re-enter Killswitch Engage for the better. There’s something special about hearing Killswitch Engage when they are at their best, and Atonement hits in all the right places.