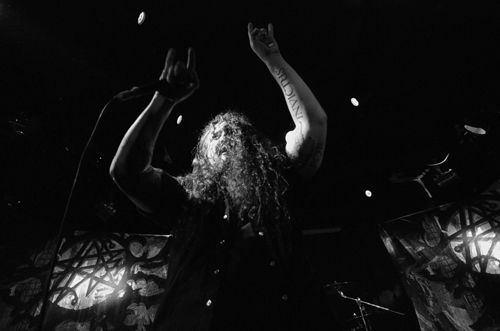 “We are here today to announce that Oli Beaudoin will remain behind the throne as the drummer for KATAKLYSM on the next album and future tours. Max has informed that he cannot continue or return to the ranks at this time due to physical health issues. KATAKLYSM welcomes Oli on board as we forge on. Max remains our brother and will always be a part of KATAKLYSM. Those who saw him in Montreal playing the Road to Devastation with us at the end of the show, saw that even with severe pain the boy still has the chops to perform. We wish him well and know our paths will cross again.”

Max Duhamel explains his decision to leave the band: “After facing my problems head on this last year and having many sessions of therapy, I’m glad to say I have my alcohol intake under control now. I can happily have a beer or two here and there, or none at all, and totally be functional without any worries. I’m a much happier man and more focused than ever. I do terribly miss my boys in KATAKLYSM (the touring and making albums with them etc.) but while I was under therapy I decided to fix other issues with my health as well: the physical part this time.

“I always had shooting pains in my left arm, but I dealt with it in silence and kept it from everyone. Sometimes it would go numb and my wrist and entire arm would lock up during concerts. It gave me anxiety and made me angry which didn’t help my mental state. I’m currently going through rehabilitation to restore my arm to the best of its abilities, but I cannot give the KATAKLYSM songs justice at the moment. It wouldn’t be fair to the boys, and it wouldn’t be fair to the fans and myself to continue. I need to take care of my health 100% before I can consider playing on a pro level again, like I know I’m capable of doing. We will see what the future holds. There’s always a surprise in the air waiting to happen.

“I’ll keep in touch with all my fans and friends through my personal Facebook. Thank you for the incredible support and all the kind words; they really helped to lift my spirits during these hard times.”

“I’m stoked to now officially be welcomed as a permanent member of KATAKLYSM,” adds new drummer Beaudoin. “The last two years with the guys have been a real blast. J-F, Maurizio and Steph are coolest bandmates I’ve had the chance to be with. The last album we wrote together in 2013 also proved that we share a common musical vision for this band. I’m just thrilled to pursue this endeavor and help push this band to a new level for the years to come.”

KATAKLYSM, are currently on tour in North America in support of their newly released Waiting For The End to Come album with Belgian gore-grinders ABORTED.