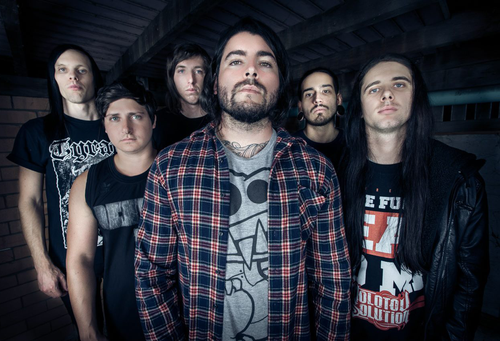 Six-headed death machine, AVERSIONS CROWN, have signed a worldwide deal with Nuclear Blast Entertainment for the release of their new slab of astral punishment, Tyrant.

Formed in 2010 in Queensland’s Brisbane, the same sunny stretch of Australian coastline as PORTAL and THE AMITY AFFLICTION, AVERSIONS CROWN developed their pummeling blend of mechanized brutality and haunting atmospherics by utilizing three guitarists brandishing 8-string guitars. Appearing live as a wall of muscle, guitars and flailing hair, the band have logged serious road miles across Australia, Europe and the United Kingdom with acts like THY ART IS MURDER, THE ACACIA STRAIN, OCEANO, ALL SHALL PERISH, CATTLE DECAPITATION and appearances at Warped Tour.

Tyrant, the follow-up to the band’s 2011 debut Servitude, was created in the oppressive heat of Brisbane’s summer with THY ART IS MURDER’s Andy Marsh producing and Mark Lewis (WHITECHAPEL, CARNIFEX) of Audio Hammer mixing. With a thematic fixation on dystopian nightmares and hostile extraterrestrial encounters, the relentless barrage AVERSIONS CROWN churn out across these ten songs will soundtrack either a solid Halo session or the coming invasion. The striking artwork was created by Swedish visionary Pär Olofsson, who has worked with acts like PYSCROPTIC, ABORTED, ABYSMAL DAWN and THE FACELESS.

Commented guitarist Chris Cougan on the band’s union with Nuclear Blast Entertainment, “A nuclear blast is pretty much what happened to my mind when I found out the label was interested in AVERSIONS CROWN. Nuclear Blast are the pinnacle of metal labels. We couldn’t be more stoked.”

The late 2014 impact of Tyrant will follow the viral success of the album’s first video “Hollow Planet.” Originally self-released as a stand-alone single, the video’s crushing bombast and sinister visuals have helped it rack up almost half a million views to date.