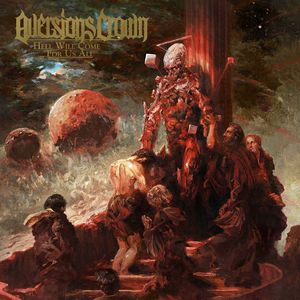 The internet can be a fickle place. There was much hubhub about Aversions Crown and their fourth album, Hell Will Come for Us All, with cries of the act mutating their sound and lyrical stance to fall more in line with the larger acts within the deathcore genre. From this scribe’s perspective, the band always seemed to tread water with a generic sound from the start (outside of their great cover art) – something that can’t really be said about their latest.

It does seem as if the band has had a bit of progression since their last output (2017’s Xenocide). Things feel more put together, particularly when it comes to the breakdown placement. It’s no longer a case of the band simply inserting them without purpose. “Paradigm” has some legitimate buildup and atmosphere as the band trudges through some mid-tempo chugging, to their benefit. The same could be said for the assaulting speed on “Hymn of Annihilation,” which eventually gives way to an impressively heavy breakdown at the end of the track. “Born in the Gutter” also shows the band trying to really up the speed quotient on their material, with some really exhilarating moments that give off a speed rush. This track also shows off new vocalist Tyler Miller, who does seem to bring in a bit more diversity to the table – with plenty of extreme range as well as some clean-ish moments (think Fit for an Autopsy) that work well within the track.

While there’s still parts of Hell Will Come for Us All that feels like the band is towing the deathcore line, there’s also a noticeable increase in the band’s songwriting efforts this time around. A fresh whiff of promise lines the album, and hopefully this is a start for the band to really bloom into something more.