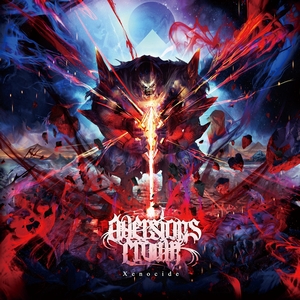 Much like Aversions Crown’s last release, Tyrant, they do manage to grab the eye with some fantastic artwork. The sci-fi based covers the band provides manage to take some flashy color schemes and really grab your attention with their approach. Sadly, the same can’t be said for their music itself, with the band’s commitment to routinely engaging in deathcore clichés.

Let’s talk about what works though first, as Aversions Crown have their moments. Some tracks, like “Erebus,” have some really enjoyable sci-fi atmosphere that combines well with their more technical finesse. It’s nothing other bands in the genre haven’t explored, but Aversions Crown do this component with skill. This is where they display their chops best – balancing more atmospheric material with faster, chock-full of blastbeats (the drumming being another album highlight) segments of speed. But they fall victim to the almighty breakdown, which has a nasty habit of getting in the way just as they start to gain some momentum. “The Soulless Acolyte” starts off strong, with all of what’s been mentioned working well for it, even some groove in its favor – until some slowdown leads into a generic and flat-out boring breakdown that eradicates all the built momentum. Some tracks, like “Cycles of Haruspex,” don’t even bother to build them up, opening right up with a breakdown – which feels rather awkward. Breakdowns have the potential to work, but only if they are molded into the song, not haphazardly tossed in to ‘get the kids moving.’

One’s propensity towards breakdowns will ultimately decide how Aversions Crown fairs in the long run. A song or two will showcase how they can effectively generate heaviness and brutality with a slight sci-fi vibe, and unfortunately, how it all manages to fall apart with an awkward or unnecessary breakdown. Kudos on the great cover art though.