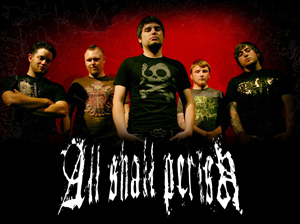 Hot off the heels of their successful run with IN FLAMES and DEMON HUNTER, Oakland California based extreme metal band ALL SHALL PERISH, have just announced a North American headlining tour scheduled to take place this Summer! Joining them on this campaign dubbed the “Heavy MTL South of the Border Tour” are OCEANO, WITHIN THE RUINS, REFLECTIONS, and BETRAYAL. OBEY THE BRAVE will also be a part of select dates. Tickets will go on sale this Friday through all major ticket vendors.

ALL SHALL PERISH scanned 8,422 copies of their latest album This Is Where It Ends in its first week of sales in the United States according to Nielson Soundscan. The record came in at #50 on the US Billboard Top 200 Chart, making it their highest first week sales ever and their highest charting release to date! In contrast, 2008’s Awaken The Dreamers sold just under 5,000 copies in the United States in its first week of release to enter The Billboard 200 chart at position No. 126.