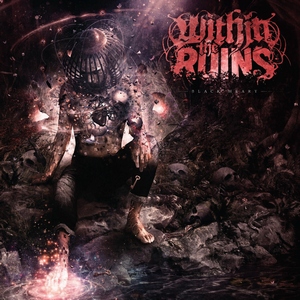 A few years removed from their last full-length, Halfway Human, Within the Ruins returns for their sixth full length effort. Backed by a new vocalist in Steve Tinnon, Black Heart sees the band continuing along the path set for them by their last 2017 release. But to a positive end, it’s a much more listenable effort.

The one glaring issue that seemed to pop up with Halfway Human was the overtly techy stuff, just there to showcase tech ability. Without question, there’s a lot of noodling and weedle-y guitar melodies floating through each of the tracks this time as well. The difference is in how the tracks are laid out and presented. The flashy tech melodies, always a staple of the act, have a more structured presence this time and feel more genuine in nature. They bring something to the songs instead of just being there for window dressing. The frenetic “Open Wounds” injects a vicious burst of speed into things, and the dizzying guitarwork feels an excellent fit, bolstered by some slower moments that allow a more melodic groove to come into play. At the most frantic, there’s an almost video game-y feel to some of the music (Mega Man anyone?), and it adds a more playful quality to the tech/prog aspects. Something that comes across quite well with instruments “Eighty Sixed” and the newest iteration of their series in “Ataxia V.” New vocalist Tinnon comes with a solid range, with the usual growls/rasps pairing with some clean vocals (see the title track) – not something that is abused but only tailored to the necessary tracks.

Within the Ruins have their groundwork laid out for them with each new release at this point. Black Heart doesn’t make any major waves, but it pleasingly feels more structured and fun without abandoning the band’s proggy tendencies. Fans will certainly dig it.