Recently, I had the opportunity to chat with Richard West, keyboardist and a founding member of progressive metal band Threshold. This exciting UK act is bustling under a beehive of serious activity of late; what with the arrival of a new album (March of Progress) and subsequent tour plans in 2013 and beyond. Richard was gracious enough to take some time to chat with Blistering on a warm Sunday afternoon to discuss a wide variety of topics relating to the upcoming release and of the exciting times ahead with the band.

I was stoked when I learned of the news that I would get the chance to interview Richard, and when I asked him what his favorite track on March of Progress was, he was surprised that I came up with that question. He had related to me that out of 15 interviews my question was a first for him. I was beaming with pride after that, so read on and see how the rest of the interview went…

Blistering.com: I know it’s been five years in between albums, so what have you been doing in that time?

Richard West: Ah, we have been busy, so I know it seems like a long time. We started off in 2007 with Dead Reckoning and our previous singer Mac [Andrew McDermott] left the band very suddenly and it really through us. It was a bit like driving along at full speed and suddenly you hit a brick wall. It really jilted us and it took a while to get back up to speed again. We kept on touring and we got our original singer [Damian Wilson] back. We kept on going and we decided we would keep on touring for a while. We needed to get used to each other on stage again and we were really enjoying each other, so we concentrated on that for a while.

Then we put together a box set called Paradox so we could go back and revisit many of those demo songs from the 80’s and early 90’s and we re-recorded them with Damian coming back in and our other singer [Glynn] Morgan coming back in too. It ended up being a long and lengthy project and that took us to 2009, when we started thinking about a new studio album. In 2010 we started in earnest, but again it was a slow climb because there was a bit of nervousness of what the new Threshold would sound like. We knew what Damian sounded like on stage singing Dead Reckoning, but we weren’t quite sure what his vocals would sound like in comparison to Mac, so we needed to take that into account to make sure the melodies fit. We needed to make sure the arrangements worked for him too, so I think it just took us a while to find our feet.

Blistering.com: So this leads me into my next question about Damian. Is it going well with him since he’s come back into the band?

West: Yes, fantastic. It’s very interesting because the last time he was with us was in 1997 and we did the tour then for the third album Instinct and he was a good frontman. He’s a great singer who really pays attention to detail and we would record every show and after the show we would get back on the bus and party, but Damian would be sitting there listening to the shows listening for anything he got slightly wrong so he could do it better the next night. He always had that real attention to detail, but he didn’t have a lot of stage experience. In the 10 years that he was away, he did two years as the lead in a top London Musical and then he toured with Rick Wakeman [Yes] and his band, so when he came back to us he was a seasoned professional. He was phenomenal, he commanded the audience and he was brimming with confidence. So having Damian back has been all positive and really good.

Blistering.com: I was really saddened to hear of the passing of Andrew McDermott. Did you keep in touch with him after he had left the band in 2007?

West: Ah, none whatsoever. When he left it was very odd. We spent a long time making Dead Reckoning and he was so positive about it all, we all were actually. We moved labels, we made this great record and we had big plans for the touring, and then five days before our first show was due he sent us a message saying he wasn’t coming. He never explained it and he wouldn’t let us get in touch with him. I think he knew he did the wrong thing and he felt really guilty about it, but he didn’t want to admit it. I honestly don’t know to this day what the true reasons were for him leaving because the week before he had been so positive about it. He really didn’t want to be in touch anymore, so we just moved on and went our separate ways. It was tragic when we heard the news of his death, though.

Blistering.com: I just wanted to ask you a bit about March of Progress. Do you have any favorite songs on the album?

West: It’s funny, I have done about 15 interviews and you are the first person to ask me this.

West: I think “Colophon,” not necessarily the final version, but for me when I am writing all the passion I feel for the song when I am making the demos I just loved it. It was one of those moments where I switched off any preconceptions in my head and just write with total freedom and didn’t mind where it went. It was just something for me and what I consider just making a pure piece of art. I think it’s one of the best things I have ever done. It’s not quite what I had in my head originally, but you bring a song to the band and it becomes the band’s personality, but I done a lovely job of it and that’s probably my favorite song on the album.

Blistering.com: I just noticed that you posted a lyric video for “Don’t Look Down Below,” so do you plan on filming an official video for any of the songs on the new album?

West: We do have a video competition running for “Staring At the Sun,” effectively to become our third single and I think that is a really strong song. Damian sounded phenomenal on it and he did a good job, so we will see what the fans come up with. So that will be the next video.

Blistering.com: I also noticed that you just announced being a part of the Hard Rock festival for May 2013, so do you have any other touring plans beyond this show?

West: Yeah, we would have loved to tour earlier, but it looks like we will be touring in March now. It was the only time where we were all available to do it because everyone has other bands they are in, so it looks like March was the best time to start. Other than that, we will try to do as many festivals as we can do, and maybe try to come back to America. I would love to say we would be coming to America, but at this point I really don’t know.

Blistering.com: Have you ever toured in America before?

West: We’ve done a couple of full tours before, and it’s great fun to do. There’s something to be said about European bands coming to America, so I really hope we do it.

Blistering.com: On a personal note, you’ve been a founding member since 1993, so is there anything that stands out from all those years being in the band?

West: One of my favorite moments we played a show with Within Temptation in Holland and that was to 8,000 people, maybe four or five years ago. It was mainly Within Temptation’s audience and I wasn’t expecting much from them because I didn’t think they would really know us. We did one of my songs called “Pilot in the Sky of Dreams” and it’s a song that really means a lot to me. It seemed like a quarter of the audience started singing the chorus back to us and I was surprised that they even knew it, but it was just one of those moments. One of those lighter than the air moments, and it just melted my heart. It was really special and I enjoyed that.

Blistering.com: Now getting back to March of Progress, how are the record sales going in Europe for it?

West: Well, March of Progress is the start of a new journey for us really with Damian back, obviously, it sounds quite different and the writing style changed a little bit. There’s always that worry when you change singers and there’s a worry if anyone is going to buy the record. In Europe we are in seven different country charts and it looks like our best selling album far. I am very encouraged and I so grateful for the fans keeping faith with us.

Blistering.com: Now here’s a bit of an odd question for you. I’ve often heard that you are England’s answer to Dream Theater, so what’s your response to that?

West: Ha-ha, no, I love it, actually. That’s been around since the 90’s and I think when we started there wasn’t a lot of prog metal going around. Dream Theater were one of the poster bands, so if anyone ever said “progressive metal,” the only answer anyone ever had was Dream Theater. I think the European charts knew the only way to market us was to say we were a progressive metal band and that’s how we become known as England’s answer to Dream Theater.

Blistering.com: I just have one final question for you. I was wondering how things are going with Nuclear Blast. How are they treating you since you signed with them?

West: Phenomenal. They treated us so well, and there’s always that concern when you move to a bigger label, that maybe you become a small fish in the big sea. You know they have bands like In Flames and Nightwish that are selling multi-million copies of their albums, and we are going now in a smaller genre, so we could get lost, you know. They’ve treated us fantastic and they have done such a great job promoting the new album. Like I say, we are in the charts all over the place and that’s never happened before, so they are doing everything right and we really believe in them.

Blistering.com: Ok, well that’s all the questions that I have for you, so I wanted to thank you once again for talking to me. I also wish you the best of luck with the tour.

West: Well, thank you. We do hope to see you somewhere on the tour. 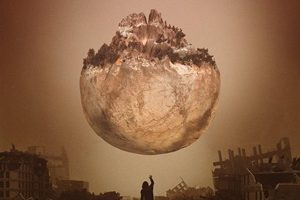