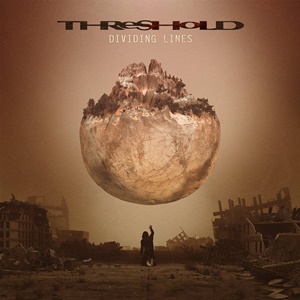 One of the most underrated bands in progressive metal to these ears remains UK’s Threshold. Active since the late 80’s, their discography contains a wide array of melodic material featuring solid songwriting/musicianship mechanics, while not necessarily being the most innovative or technically driven outfit. Slowing down output this deep into their career, Dividing Lines is the twelfth studio platter and first in five years – intertwining the expected AOR-ish/melodic vocals and harmony combinations, killer keyboard/guitar movements, as well as introducing some harsher, more modern accents to showcase artists willing to expand horizons without forsaking the base platform sound that captured followers from the start.

The driving guitars, supporting keyboard underpinning, plus fluid lead breaks and heavier to softer touches allow “Let It Burn” to be a standout track, the quintet supporting the key transitions with proper groove/hook elements, while the instrumental sections feature intriguing, active drum propulsion as well as a chant-like closing calmness. Delayed computer effects work well against the main stunted guitar/drum combination for “Silenced”, keyboardist Richard West injecting excitement in shorter bursts of his finger wizardry. Smartly placing the two ten-minute plus tracks midway through and concluding the record ensures those progressive aficionados will get their just rewards in advanced instrumental sophistication against some intriguing vocal flexibility, “The Domino Effect” building out best from its softer, ethereal beginnings into a driving effort, the Moody Blues/Yes progressive rock-like influences sure to elevate deep conversations through numerous playback sessions. You get a sense on a shorter composition like “Run” that Threshold can capture a pocket of the modern rock audience through heavier riffs beyond the moving, emotional vocal presence Glynn Morgan engages in, the slower, mid-tempo rhythm section shifts between steady grooves and exciting double kick/snare juxtapositions. It’s the little things that mean so much in determining the versatility for universal appeal years down the road – Dividing Lines chock full of those little gems, where jaws drop, hands clap, or heads swing back and forth to what comes out musically and vocally song to song.

Almost delivering another double album’s worth of material (this time 64 minutes versus the 82 minutes of 2017’s Legends of the Shires), Dividing Lines keeps Threshold in the conversation if you love classic progressive metal that remains relevant to appeal to more than the schooled musician.