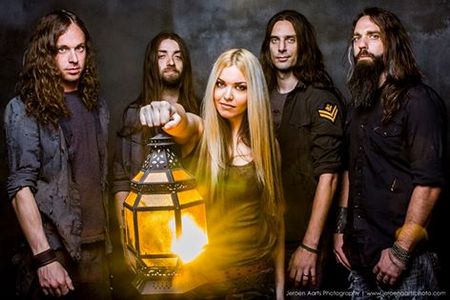 The loss of a vocalist can be quite damaging for a band, regardless of genre. Particularly when said vocalist is a rather prominent factor in the band. Last year, when Arch Enemy announced that Alissa White-Gluz would be joining their ranks, The Agonist was left in an uncomfortable position. Carry on with White-Gluz, knowing that Arch Enemy’s touring schedule would immensely impact their own touring/recording potential, or find a replacement. The band chose the latter, finding a woman named Vicky Psarakis through her Youtube videos (of which there was a cover of The Agonist’s “Thank You, Pain”).

New vocalist in tow, the band completed their recordings of what would become Eye of Providence last year and hit the road to some summer festivals, giving Psarakis her live debut. After a brief delay, we are now just two weeks away from the release of Eye of Providence. Taking the band’s knack for differentiation and focusing it on a complete song as opposed to snippets within each track, alongside Psarakis’ energetic vocal performance, has elevated The Agonist to an entirely new level. This new and improved version of The Agonist is hungry to prove themselves and will no doubt be soon be receiving some well-deserved praises from their fans, both old and new.

Receiving a phone call from guitarist Danny Marino, we were able to discuss all of the band’s activities over the past year. Including their search for a new vocalist and split with White-Gluz, the recording of Eye of Providence, summer festivals, as well as their approach to their two most recent videos, including the satirical “Gates of Horn and Ivory.”

Dead Rhetoric: There are 4 songs out there from Eye of Providence at this point. How’s the feedback so far?

Danny Marino: It’s great. I’m really happy overall with the fan response. The majority have been positive and a lot of people are surprised too. That’s always good to kind of surprise people. Especially with the two latest songs, which are actually from the final recording. Even though the songs themselves aren’t that different, the two that were released were demo recordings [from the Disconnect Me single] so we’ve had the time to make them sound their best.

Dead Rhetoric: I read that you like to test your songs in the live setting. When you went out last summer, how did the new tracks work out?

Marino: They worked out really well. Especially “Gates of Horn and Ivory,” the first song on the album and the first video. That was one of the reasons we ended up making it the first video, because the crowd response for that song every night was just immediate eruption. What’s really cool about that was no one at that point had heard that song. So the fans were going crazy for something they’d never heard before. It’s not like “oh, I love this song,” it’s like, “I love this, I don’t know what it is but I’m going to start moshing right way.” We knew that it had power, but that was great. Just overall, the new songs we’ve been playing have been very well received.

Dead Rhetoric: You were right in the middle of the spotlight last year when you announced that Vicky Psarakis was in and Alissa White-Gluz was out. Was there anything that caused a wait with the album; wasn’t it supposed to be released back in November of 2014?

Marino: All the music was done. It’s just that when you put out an album with record labels and distributors and marketing firms, there’s a lot of other factors in there that make it doable or not. We had to make a hard decision, but it was the right decision in the end. Because we were able to deliver the album to the right audience and made sure it was going to be heard by everyone. It was hard for us because we were just sitting on it and saying, “Oh my god I just want to show everyone right now,” but sometimes you have to do it.

Dead Rhetoric: There was a bit of friction when you parted ways with Alissa White-Gluz. Has there been any contact since you’ve moved on with Vicky?

Marino: No. You can’t really talk to someone when they are saying all the kinds of things that they are out there in the public. We aren’t really saying anything negative on our end, but clearly, it’s obvious from her end that she does not want to speak with us. That’s just the way it goes I guess.

Dead Rhetoric: The Agonist was established with Alissa. When you started looking for a new vocalist, did you feel it needed to be another female vocalist?

Marino: Pretty much. It was talked about a little bit at first about whether we should consider some guys. But it felt like overall, we are already giving the fans a big surprise and a shock and that would take it too far. As well, we aren’t a band that just has [growled] vocals. It that was the case, then yeah, of course a guy could technically work. It’s a matter of getting a guy to sing parts that were originally sung by a girl in a pretty high register. There are guys that can sing that high, I know some of them, but when it comes from a man at that high pitch it sounds very different. It’s not really the tone that we want for our band.

Dead Rhetoric: Along those lines, with people who just look at a picture of the band, is there any sort of prejudice that you see by having a female vocalist?

Marino: Absolutely, It’s definitely a double edged sword. It definitely gets you a good amount of attention, but it also gets you a good amount of prejudice from people that either automatically discount a band with a female singer or they automatically assume that, “oh it’s just because she’s a pretty girl.” I know of other bands where I can agree with certain people that, “yeah, there’s a pretty girl up there, but she’s not actually much of a singer.” Whereas with our band, whether it was previously [Alissa] or with Vicky, in both cases, I knew that we had a great singer. It didn’t matter that she was a woman. But you do get that; there is a prejudice out there for that. They will automatically will say that it is all image, when that’s not the case a lot of times.

Dead Rhetoric: On that topic, with the “Gates of Horn and Ivory” video, there is an image vs. music aspect. Is that what you were trying to feed into with the video?

Marino: Yeah, pretty much. I wanted to find an interesting way to illustrate the meaning behind the lyrics. “Gates of Horn and Ivory” is from an ancient Greek text called The Odyssey. In the book, if you have a dream and see gates made of horn and you look behind the gates, it’s the truth and you should trust it; that is the truth you should seek. But if the gates are made of ivory, because ivory is very beautiful and alluring, it is just a deception. It’s making you believe that you should trust it when it’s a lie. I wanted to illustrate that in the video using the music industry as the setting. Talking about exactly what we were saying before, where you just put something sexy and appealing and that’s what you are selling. It’s on top of the music, and the music isn’t really the focus. I wanted to show that because of the fact that we’ve been lumped in with groups that rely on that, when the truth is that it’s just a coincidence that we have a good looking girl fronting the band. The real thing is that she’s a fantastic singer. Sorry that she’s also good looking, but that’s not all we are. It was a fun shoot too because we got to laugh at ourselves and stuff like that.

Dead Rhetoric: Looking at the video, particularly the end where you try making metal faces, it does seem like you had a good time with the video. But was it difficult having to deal with all of the make-up aspects of it?

Marino: Yeah, but we were surrounded by friends too. Everyone on that shoot was a close friend. It was a good time, but I really don’t like having make-up put on me. I have really sensitive eyes; I don’t know how women do it. The make-up artist was having quite a time with me, because I would tear up and blink immediately and I couldn’t handle it. So yeah, that part was not too fun, but otherwise everything else was a just a blast.

Dead Rhetoric: I was looking through comments when I first watched it; do you feel that there were some people that just didn’t get what you were doing with the video?

Marino: Yeah, and we kind of expected that. The director had some concerns about that when I first pitched the concept to him. I did too, but it was just a matter of needing to find a way to make it as clear as possible about what was going on. I think that we couldn’t have made it anymore clear. We were clearly upset and we didn’t like anything about what was going on. But a few people I guess, still assumed that we were trying to say that that’s who we are now. If you look at the amount of people, I think it’s a really small number that didn’t get it. And if they didn’t [get it] immediately our other fans just jumped on them.

Dead Rhetoric: With that idea in mind, your most recently released video [“My Witness, Your Victim”] – do you feel that having a more traditionally metal video was the fallback to say, “If people don’t like that video you can watch this one instead?”

Marino: Kind of. We knew what our videos were beforehand so we did decide what order to put them based on what they were. We wanted to shock people right off the bat. Also the song itself [“Gates of Horn and Ivory”] is very in your face right away. So why not shock people with the video too? It got a lot of attention, so I think it worked. So this latest video, for “My Witness,” it is more traditional in a metal video sense. Horror-themed and brutal and traditional in that sense, but it still has a unique style to it. The way the imagery looks, that was all Chris Kells, our bass player. He shot and directed that video. That’s what he does when he’s not playing with us. You’ll be seeing a lot more from him I think, with us and other bands.