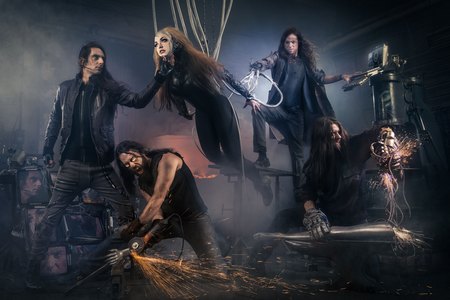 Dead Rhetoric: Along with that visual aspect, you had the whole futuristic photo shoot when you released “Disconnect Me” last year and the cover [of Eye of Providence] has a combination of photography with illustration added. Is there a lot to that visual aesthetic that is important in terms of portraying the band?

Marino: Yeah, I think that the band has always tried to do interesting photography and imagery to match the music. I feel like it’s cool, because you want to offer the fans something that they aren’t used to seeing. We hate just giving them, “here’s the band leaning on a brick wall.” Why even show them the photo then? There’s no point in even giving them a photo, there might as well be no photo. So if you are going to give a photo or artwork to the fans, you might as well make it as artistic as our music is. We also hire a lot of skilled people for that, it’s not like we do all that. So we try to find similar-minded artists that we think do really great things, and we say, “Hey, let’s try to something great together.”

Dead Rhetoric: When you found Vicky, you didn’t really hold any auditions. How did you know that Vicky would end up being the one?

Marino: Well we didn’t. But from all the searching that we did, no one really came close to how well she fit all the criteria that we needed. There were some other people that were being considered, but she had everything that we needed. It was almost too good to be true, that she could do all this. It just all lined up.

Dead Rhetoric: As you got further and further away from the release of Prisoners, would you say there was any pressure to make this album really deliver, especially in light of all of the events that have transpired over the last year or so?

Marino: Yeah, I think we all had something to prove. But at the same time, a lot of this music was written a long time ago. It’s just the evolution of where the other guys and I have come as songwriters. We were going to deliver that album already, musically-speaking, just from the instruments. But then Vicky put her stamps entirely on it too. A lot of the vocal melodies that you hear were written by her. She didn’t just come in and we were like, “yeah, sing this.” There was collaboration. Some of the vocal melodies were written by myself or Simon [McKay] and we shared the lyric writing as well. But the majority of the vocal writing was done by Vicky, so she’s a big part of the sound of the album.

Dead Rhetoric: You’ve mentioned that there was a more “full” collaboration with Eye of Providence than what you’ve done before. What factors do you attribute that to?

Marino: It helps when you are friends with everyone. You can easily communicate. When we were rehearsing and writing/recording the album, Vicky lived here in my apartment. So when you live together with someone, you really get to know them and you can just talk. You can say, “oh hey, this part, do you remember that, let’s change this.” There’s this day-in, day-out vibe that I think really contributed to making the album what it was. The songs came out as one art piece. It wasn’t like everyone doing their own little thing and putting it altogether at the end. Everyone knew everyone else’s part backwards, so we could anticipate and adjust our own playing based on that.

Dead Rhetoric: You’ve done a bit of improving too, as in coming up with the main structures but leaving some room to kind of let it flow naturally. Is that correct?

Marino: Yeah, kind of. I’ll write a song, with a certain structure in mind for it. Then I’ll come to the guys with it. Simon has a very creative songwriting mind as well, and he’ll be like, “yeah, but think about this. If I had this drum beat here and then did this fill, then the change could happen here instead,” and I’m always open to saying, “you know what, you’re right, that’s way better.” We’ve always had that type of mindset, but it never existed when it came to vocals. There was no communicating or collaborating with the vocals. There was no, “you shouldn’t sing on that part because there’s a guitar solo there,” it was “well, I guess she’s singing on the guitar solo.” So now we’ll talk to Vicky, and we’ll ask her to change something and she’ll say, “Actually, could you play the verse an additional four repetitions because I have more lyrics that I’d like to fit in here,” and then we’ll do that. We work with each other to make each song be the best it could be. That didn’t work before. It was so separated that it was like, here’s the music and here’s the vocals, and that was it. There was no changing either of them.

Dead Rhetoric: Without going too negatively, over the course of your three albums with Alissa, did it come to the point where you were beginning to feel that the rest of the band was in her shadow so to speak?

Marino: Kind of; [That was] the picture that was being painted I guess. It’s like, who’s The Agonist, and people would say, “It’s the blue-haired, girl band.” Again though, I find that if you spoke to our fans, who are real fans of our music, they would say absolutely that there is a huge amount of artistic and creativity within the music itself of the band on all of the albums. There’s a lot going on there just to listen for. Our image now is more of a full band. Vicky is still the lead vocalist, and she’s in the center of the photos, but overall we’re a band. You’re talking to me right now. I’m answering questions about how we wrote the album and how we operate as a band, and truth is that I’ve always been at the core of that. All of the business-end and the decisions on the songs, and all this stuff, but before I wasn’t really asked about it. And the guys weren’t either so it’s just a matter of now I do some interviews, and Vicky does some interviews, and Simon does a few interviews. And that’s the way it should be because we’re a band.

Dead Rhetoric: It seems almost as if it was getting to the point where there were a lot of people that would lump The Agonist in with the “metalcore” tag, which doesn’t really fit, because there was more attention being paid to the vocals than the music going on behind it.

Marino: I think people do just want to be able to categorize you. It just makes it easier for them, because they want to feel like they belong to a certain group of people and they can identify themselves through a certain genre of music. If they like your music, they’d like to be able to label it within that label that suits them. This doesn’t go for all people, but it goes for a certain percentage of the population. We have always struggled with that since the beginning, because we are a band that likes to try a bunch of different things on an album. You probably could pick out a song on the album that sounds 100% metalcore. I would say, “yeah, you’re right. That sounds like Killswitch Engage or As I Lay Dying or something.” But then there’s also a song that sounds like The Mars Volta or something like that, but that’s just who we are and that’s how it’s going to be.

Dead Rhetoric: With Eye of Providence itself, the second half of the album seems a bit more experimental in terms of the melodies of it. Were you taking advantage of having a new singer and trying to push it in a few different directions?

Marino: We kind of noticed that some of her strengths were things that were kind of new, so on some of those songs I wanted to try to bring that out. But some of it, like I said, was already written before she was in the band, so no that wasn’t really connected. But for example, the acoustic song [“A Gentle Disease”], that was written after she was in the band. I knew she had a really good, soft, singing voice. I love the sound, whether it’s screaming or just powerful rock singing vocals, I love that and the majority of our music has that. But I knew she had this really sweet voice, that was jazzy and smooth and I really wanted her to be able to use that somewhere. I had this dark acoustic piece, and I thought that would be perfect, and she ended up doing exactly what I hoped she would do. I didn’t write any of those vocals; that was all her, but she put exactly the kind of mood that I was hoping would go on that song.

Dead Rhetoric: So you are going to be heading off to Europe next month. When you get back, you’ll be doing the New England Metalfest and Texas Independence Fest. Is there going to be a full-blown North American tour at any point soon?

Marino: Well, you have to get from Texas to Boston right? You’ll be hearing about a US tour soon.