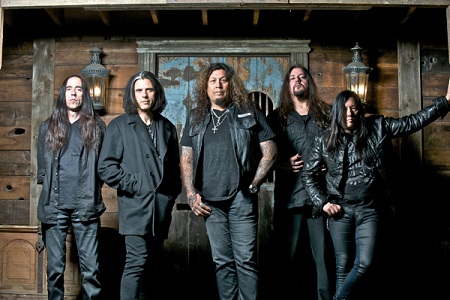 Always weird to hear a classic thrash band partially admit their mortality: “We can’t keep touring forever, so here’s a DVD.” Such are the words out of the mouth of Testament guitarist Eric Peterson, who appears to be quite aware that it might not be in the best interest of the Testaments, Exodus’s, and Slayers of the world to tour into their 60s. It might not be a good look – surely you can picture it too. So maybe the days of taking a prolonged period of time between studio albums are a thing of the past…for Testament. Exodus, Metallica, and Slayer? Not so much.

The back-half of 2013 will see the band focus on the release of their Dark Roots of Thrash DVD, a live set shot this past February in Huntington, NY, one that captures Testament in tip-top shape with Gene Hoglan manning the throne, Skolnick shredding, and Chuck Billy being Mr. Indomitable. It’s a worthy live visual, full of all the classics and searing new cuts, a lot of which blend quite seamlessly with the band’s invincible older material. So with the DVD release in tow and a prime support slot on the Lamb of God/Killswitch Engage fall North American tour, Peterson phoned DR to wax on all things Testament. Here’s the scoop:

Dead Rhetoric: This is not your first visual foray – you have the Seen Between the Lines and the Live in London DVDs, but what made this the right time to shoot another DVD?

Eric Peterson: The last one was 2005, so almost 10 years later. The Live in London was more like a reunion, playing all the classics and stuff. This one is “this is the band now.” We’re on fire now; it’s full circle with our material basically, even the stuff Alex and Greg [Christian] weren’t a part of, like The Gathering.

Dead Rhetoric: The obvious thing would have been shoot a show in the Bay Area. Why Huntington, New York?

Peterson: It wasn’t really planned out to be at that specific place but we were looking to shoot on the tour, the “Dark Roots of Thrash” tour which was Testament, Overkill, and Flotsam & Jetsam, and we thought it would be cool to capture this tour and that was one of the clubs that is a good venue and they’re easy to work to make it all happen. It all just worked out that way.

Dead Rhetoric: In terms of the coordination, was it a big task to get it all together?

Peterson: Not really. The company that did it, they did an 8-camera shoot and we told them what we were looking for. We talked a little before on how we wanted it to look, and basically once we got everything shot, he started doing the editing…it wasn’t that hard of a process.

Dead Rhetoric: So for the set, there are no songs from Low. Any reason why?

Peterson: Yeah, Low and Demonic, and even, I don’t think we played anything off The Ritual either. That was the set we were doing. We did throw in some extra songs for that night, like we had to put “Disciples” in. [laughs]. They’re on other DVDs, so we felt “Riding the Snake” and “Eyes of Wrath” were better to put on there. We have played the songs – but not at the same time – but they felt good, and worked out good. I don’t think with this tour we tried any songs out, like “Oh, we don’t think we like that.” They weren’t tested on any one-offs or anything, so we had in mind what set we wanted, a heavy set. Meat and potatoes.

Dead Rhetoric: Gene has had to miss some dates here and there over the last year, so is it much of a task to get him up to speed on things?

Peterson: We really don’t rehearse that much; I would say our first show is our rehearsal. [laughs] He learns stuff pretty quick and he’s out of all the drummers, he would be the one that would be the most solid on the first couple of shows. Other drummers we’ve worked have taken a bit longer to prepare, but Gene is usually pretty prepared. Plus, he’s doing other things as well, so he’s probably always playing.

Dead Rhetoric: Does using other guys like Paul Bostaph or John Tempesta throw you off?

Peterson: It’s a pain to teach them all the songs and rehearse some more, but they all do their job good, I think.

Dead Rhetoric: Is Gene in it for the long with this record cycle and beyond?

Peterson: Oh, definitely. Everything we’re doing for this record cycle, and the next record, he’s onboard. It looks like Gene is going to be with it.

Dead Rhetoric: That has to be a relief.

Peterson: Definitely. Not having to worry about finding somebody and learning the songs. Plus, not only that, Gene plays them very well. He brings freshness to all the material.

Dead Rhetoric: You mentioned wanting to get the DVD out before the next album, so is it presumptuous to say you’ve started thinking about a new album already?

Peterson: Definitely. We’ll probably start working at the end of the year and come up with some ideas. Throw some stuff together…we’ll see what happens. We definitely want to work on a new record.  I definitely have a bunch of stuff that I’ve written lately. I’m actually recording the new Dragonlord right now, which has been a thorn in my side for not getting it done.

Dead Rhetoric: It’s been a while since you guys put out an album.

Peterson: Yeah. It’s going to be really good. I’m really excited about it; I just want to get it done [laughs]. We’ll have a different drummer. His name is Alex Bent. He’s a really good drummer; he’s only 20 and he’s got a couple of bands he jams with. I know he did a lot of touring with Decrepit Birth.

Dead Rhetoric: In terms of doing Testament albums, since you have such a deep back catalog, are new albums as important now, in comparison to the 80’s or 90’s? Could you get away without doing a new record for another extended period of time?

Peterson: We did get away with it…we had festivals, and it worked, but nowadays, you have to have more product out sooner. There’s so many bands out there. Life is just so fast now. [laughs] You have to keep people’s attention or they’ll go somewhere else. I do think our fans are loyal and will stick with us. As far as touring, you need to have new product out. This one will be a lot quicker than the previous ones. The previous one, it wasn’t for a lack of ideas – we were touring so much. The Formation of Damnation did really well; we were just booked solid for two-and-a-half years.

Dead Rhetoric: I always thought the melodic component of Testament when talking about an album like The Ritual was really strong; do you foresee the band going down a similar path again?

Peterson: We’re leaning toward more melodic stuff, but heavy. Incorporating the two and getting the best of both worlds, and judging by some of the riffs I have now, they’re pretty melodic and heavy. I’ve been listening to old Tygers of Pan Tang and been influenced by stuff like that.

Dead Rhetoric: If you want to look at the album cycle this way, at least you don’t have anyone breathing down your neck ala the suits at Atlantic for Souls in Black.

Peterson: The promoters that book shows, they definitely said something to us about needing a new record. It’s good to start now – who knows how long it will take.

Dead Rhetoric: You have the Lamb of God and Killswitch Engage tour coming up. What are your thoughts and expectations for it?

Peterson: It should be pretty smooth smiling. We play for 45 or 40 minutes. We go on at a really good time – 7:30 or 8:00. It should be a breeze, and I’m really looking forward to playing with Lamb of God. I’ve been friends with those guys for a really long time. We’ve always wanted to play together; it’s a good lineup.

Dead Rhetoric: Lamb of God has always been very vocal that they’re influenced by you.

Peterson: Yes, and they have a younger fanbase, which is cool. They’re really a big part of this second wave of thrash. It’s going to be a tough decision for the set. We’re going to get seven songs. I know Chuck and Alex are talking about doing a medley, which to me, I’m not into those, but we might attempt to try one. As a fan, I always get mad when I don’t hear the next part. [laughs].

Dead Rhetoric: Wrapping up, what’s the next year looking like?

Peterson: The Lamb of God tour, which should be pretty cool. I’m going to be finishing my Dragonlord record, mixing it in December. Then start working on the new Testament, then we’re on the Soundwave tour in Australia, which is a traveling festival, which should be really fun. Do that, then finish the record.