Beginning another year around the sun, there’s always high expectations for the year in music to best the one that came before it. While such debates seem trivial (particularly this soon into the year), there’s no doubt that things are off to a great start. This month we check out AutomatoN, Halls of Mourning, In Asymmetry, Noah, PDP, Second Shooter, Velian, and Volucrine.

The newest effort from the prolific Nate Exx is from his AutomatoN project. An industrial-laced death metal vibe a la early Fear Factory, complete with mechanized riffs and harsh/clean vocals is the expectation and he delivers on it fully. But the floaty, sci-fi atmosphere is what often gives AutomatoN some of their most interesting moments, in how they counter the harsh and cold riffing (check out the trade-offs in “Section X”). The industrial effects also hit the futuristic mark, and deliver a Fear Factory-inspired experience that many are bound to enjoy.

Hitting into the sweet spot of older melodic death bands of the Gothenburg era and a sprinkling of the ‘90s Scandinavian melodic black metal movement, Embers into Fire has a nostalgic feel to it. But the band wisely differentiates themselves with adding some more modern touches, and the result is something that has the triumphant glory of the past without sounding dated. Each track has some doozies for melodies that will impress even the most jaded melodeath critics (see “Walls of Solitude”), positioning Halls of Mourning as an act with much to offer as they continue to evolve.

With an utterly explosive sound to them, In Asymmetry manages to nail all of the best parts of tech death without sounding clichéd or repetitive. Frenetic speed with neoclassical shredding and elegant riffs that manage to stay catchy as well as intricate, there’s a clear indication that In Asymmetry have studied the best acts in the field. But with that knowledge, these two tracks manage to stand out as they lean into the neoclassical aspects more instead of just speed-rushing through everything. There’s more dynamics, and some great pacing – if this is a sample of what the band can do, some more can’t come soon enough.

The cover of Reflection admittedly stood out quite a bit when looking into seeking out some bands for this month, and it looks about how it should sound. Almost like a soundtrack for a video game, the bombastic synths peel away to reveal some occasional shredding guitar and power metal-inspired melodies. Occasionally some electronic/dance elements are used in the mix as well, which makes for quite the varied experience. But the more shred-heavy songs (see “Non-existence Proof”) should make guitar and video game OST fans quite pleased with the result.

9-string act PDP have ample heaviness that follows them from second to second. With some nods to djent-y riffs and massive grooves, one can hear a bit of Meshuggah in the result, but not to the point of imitation. Instead, some extreme metal aggression and influences bring the band into more unique areas. Thundering riffs and some more progressive soloing allow for some switching in the tempos along the way, even if the mid-tempo grooves are the prevailing force. But for those wanting something really in on the heavy riff side, PDP should definitely scratch that itch.

Tough to dig into Second Shooter’s sound with one particular style/sound. There’s the aggression of death metal, the straight-ahead immediacy of hardcore, and there’s plenty of thick grooves to lay into over the course of the five tracks here. There’s a modern feel to this, but with the added extreme metal intensity, there’s more depth to it than one might expect. An occasional melody or solo rears their head as well, without spoiling the brutality level that the band hits consistently. Even the closing number, “Apology,” which starts on the most melodic notes (yet still dark) eventually builds into something far heavier. All in all, some throttling, aggressive material to be had.

Melodic death metal crossed with power metal is a combination that’s logical but doesn’t always fit from band to band. Velian get it though, with some brutal yet catchy riffs and growled vocals fitting nicely with some symphonic power metal elements and clean (but not ‘too clean’) vocals. The result is frequently epic in sound and tone, with keys nestled into the right moments, ready to lift a potent vocal melody or punchy riff to the next level. Across the ten tracks, there are moments that can even go into more gothic territory (“Maiden of Stone”). There’s a lot to really dig into and enjoy for those who want melodic metal with some grit to it.

Arguably falling into the more modern side of the melodic death metal movement (meaning more clean vocals and straight-ahead structures), Skywards never lacks for hooks. Some more brutal, metalcore-esque vocals and riffs provide the band with a lesser-used but often effective contrast with some melodic and almost power metal elements, with some rock attitude as well. It’s impressive how much mileage that they get from mixing up the different elements from track to track, and the catchiness always manages to stick around. Volucrine are another high quality modern metal act to check out if you dig that particular sound. 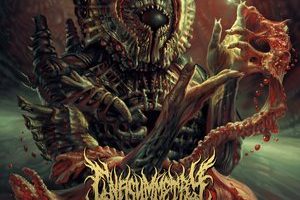