As usual, this is the last traditional Bandcamp column of the year, as the December one always focuses on the best offerings from Bandcamp in of the current year. So let’s go out with a bang here in November, with bands like Alustrium, Cerebellion, Red Sea, Remnants of the Fallen, Rosebourg, Stvannyr, Unseen Faith, and Vocyferium.

Alustrium – Insurmountable
Alustrium made some noise back in 2015 with their debut, A Tunnel to Eden. It’s taken a bit, but the band has returned with an equally strong effort in this EP. Weaving and winding progressive metal, it’s also hard as nails. For all of the intricate and proggy bits that Alustrium champions, there’s always a driving momentum and gripping element to it. Excellent solos can provide some respite from the energy, but you are bound to be sucked into the potent mix of blunt heaviness and intricacy that continues to reveal itself with successive listens. Plenty will make celebrate this one, and for good reason.

Cerebellion – Beyond our Failures
Another act with a five year gap in releases, Cerebellion returns for another round with Beyond our Failures. A modern and groove-based approach delivers plenty of aggressive riffing and chunky weight to the band’s sound, and provides a juxtaposition from the more melodic vocals. There’s an almost radio-friendly hard rock vibe to some of it (particularly the vocals), but they heavy grooves ground it in metallic glory. Occasionally there’s even some thrashy vibes to it when they pick up the tempo. Bottom line, there’s a lot of variety here if you are seeking something more melodic in nature.

Red Sea – Sanguine
Red Sea brings in some modern grooves and progressive elements into a blender with some thrash and power metal influences. There’s a lot of energetic riffs to enjoy, with clean female vocals that also carry some power behind them as well. A good sense of heaviness to the whole thing keeps it feeling fresh and invigorating, not to mention an interesting vibe for the vocals. While it has a modern feel, it also reaches into some classic metal territory at times (“Shadow of a Man”), which should give it a pretty broad appeal. Worth a shot if you want something with female vocals that doesn’t fit the usual (read: symphonic) mold.

Remnants of the Fallen – All the Wounded and Broken
A modern blend of influences is the best way to describe Remnants of the Fallen. They merge elements of death and black metal alongside some ‘core (arguably of the metal and death varieties) into a sound that feels urgent and frequently epic in scope. Particularly when the band is moving at faster speeds, which they often do, there’s a glorious feeling of melodies that hit you as the music hits hard. Lots to dig into with the melodies, and the ‘core blends itself really well into the band’s overall formula.

Rosebourg – Sweeter Than Your Love
Much of the base in Rosebourg is that of your traditional metal template. Catchy melodies with anthemic guitar riffing and big thrashy hooks to sink your teeth into. It’s aggressive, and has that timeless metal sound to it, other than where you’d expect a more clean vocal approach, it’s more aggressive (to the point of death growls). It’s something that gives the whole thing a boost in heaviness, and it actually works to keep the band separated from other similar acts. Notes of gothic and doom are sprinkled in at times, also giving the band a more unique vibe to play off of. Intriguing stuff to be sure.

Stvannyr – The Monastery of Misery
As the band Realm of Wolves gears up for new material, fans can take in this instrumental offering of melodic black and doom metal that they’ve released under their guitarist Stvannyr’s alias. Those familiar with the band have a good idea of what to expect, and this release doesn’t disappoint. Beautiful and flowing melodic black melodies drown the listener with sorrow and melancholy, but there’s still some bite to them at the same time. The ever-present bass gives it some added heft and playfulness to it, offering an enjoyable contrast to the sometimes ominous and gloomy vibes.

Unseen Faith – Evoke
A bruising combination of metalcore and deathcore, there’s nothing really hidden about Unseen Faith’s approach. Upfront and abrasive, there’s a lot of chugging riffs that are meant to sound as heavy as possible. Some occasional dips into more melodic and atmospheric territory take root though, and give the band some momentum to work off of. It can mix in some pop elements at times (see “Hardwired”), but the tone remains consistently heavy. It may not rewrite the rule but, but it’s quite well done and is sure to give the neck muscles a solid workout as you make your way through it.

Vocyferium – When Darkness Comes
A straight-up, no frills death metal attack with plenty of melody to back it up. Pleasingly, the melodic aspects don’t really lean in any particular direction: not Gothenburg or even a direct tie towards acts like The Black Dahlia Murder, nor does it take the tech side too far. So you end up with a frantic yet rather memorable offering with Vocyferium. Galloping and catchy, but not afraid to really dig into some more brutal riffing if the song calls for it. A solid debut for extreme metal fans to check out. 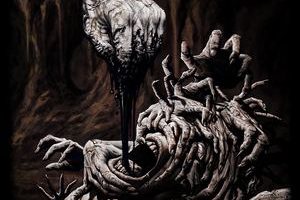