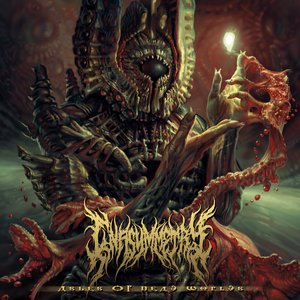 Given the massively brutal flavoring of the album, the tech piece feels more akin to acts like Deeds of Flesh, Suffocation, or Disavowed. You can easily tell that it’s there, but the dominating factor is how impressively heavy the album feels. You can grab some of those mid-to-late ‘90s vibes in the urgency of it but the album never feels too dated either. One of those ‘channeling and updating the essence’ type of releases, so to speak. The album actually ends with a Deeds of Flesh cover (“Sense of the Diabolic”), so you can get a good feel for how they differentiate while keeping it to a similar style. Bruising mid-tempo riffs and grooves often run parallel to some intricate (yet not overwhelmingly intricate) melodies, such as on “Emancipation” and this is really the band’s strongest suit. They can hit the super fast stuff, and Cesca has always been great at this on the drumkit, but the band’s personality can shine more when they roll with the chunky riffs with some melodic dressing (see “Hatred Towards the Holy Creature”). It really just allows them to unleash some devastation without losing any momentum in the music, as well as keeping it quite memorable in the end – a somewhat rare treat in this hyper-aggressive genre.

Ashes of Dead Worlds is a very solid debut, and the help from some established players ensures that it should grab the attention of genre die-hards. While it doesn’t offer much outside of what you’d expect, there’s a level of polish to this material that really aids it in standing apart from the crowd.