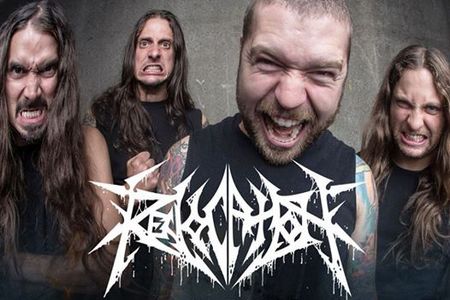 Possessing a healthy appetite for metal on the live front since my indoctrination in the 1980’s, it’s never mattered to me whether I gain my fix at a national, large theater/arena venue or in a small, intimate bar setting. Or if the bill consists of the biggest band in the land versus a strong slew of local acts. Quality trumps all these days – and when my brain and body need a great pummeling, there’s nothing better than seeking out Boston’s technical thrash/death masters Revocation.

Moving up the ranks quickly after issuing their debut album Empire of the Obscene in 2008 to Relapse Records, the band would record three albums for the label and gain the opportunity to tour the world, playing for crowds small and large, opening for acts as diverse as Forbidden, Chimaira, Job for a Cowboy, Havok, and Children of Bodom. Testing the waters after fulfilling their obligations, Metal Blade made Revocation an offer for a new contract, and in the fall of 2014 will release their latest studio album Deathless, a record that guitarist/vocalist David Davidson is very proud of.

“I think (Deathless) is our best (record) yet, I think it’s our most diverse record. Every song has its own personality but is still Revocation at the end of the day. I think it is our darkest and heaviest record yet. I think it’s our best performances all around. I’m proud of what everyone laid down, including Zeuss. The sound of this record is my favorite that we’ve captured so far. We worked with Zeuss on the Teratogenesis EP in 2012, and we thought he did a really awesome job on that. We wanted to do a full-length with him, and I think he hit it out of the park with this one.”

The new record appears to be a little more straightforward than early efforts, while also maintaining the propulsive drumming and guitar twists/turns that have become trademarks for the group. Given the current tumultuous economic, religious, and military/terrorist activities that are on the eyes and ears of the world, one suspects David finds plenty of lyrical fuel to have the word energy match the musical intensity.

“The lyrical topics varied (this time),” he states. “The title track is about our lives on the road, the touring band and the dedication that you have to this lifestyle. So that’s more of a personal song and reflection for me. “Witch Trials” – you know growing up in Massachusetts and hearing about Salem and the history surrounding that, it’s basically about religious superstition having dire consequences for people back then, and also sort of a reminder to not let those superstitions dictate or deliver justice to people. This still goes on with people today. “Labyrinth of Eyes” (is about) living under the ever watchful eye. We have some songs that have mythology in there.”

The type of metal Revocation delivers requires stamina and determination, as they certainly display a lot of quick hitting time changes, sweeps and intricate picking that goes beyond basic up beats and down beats. Reaching back into the early years of learning the guitar, I’m curious to learn about some of the breakthrough moments when David knew he was taking his abilities to another level, as it’s not something that happens on an overnight basis. “When I was a kid first taking the guitar seriously I would play the instrument anywhere from 4 to 6 hours a day. As soon as I came home from school I would go down to my basement and just play. What I would usually do is get my favorite albums from like Guns N Roses and learn the solos and improvising over the whole song to get my chops up. It’s hard to say (where breakthroughs occur). When you are practicing every day you are kind of living it, you aren’t seeing the big leaps so you are moving on a much smaller scale. I will say that in general, I can play something that will be tricky for me and (when) I’ll sleep on it, the next day the dexterity and picking will be easier.”

The band is all too aware of the need to make their presence known not just as road warriors, but also on the social media platform where you are competing for attention against the tens of thousands of other metal acts big and small. “There is not the same budget as there was for promotion and marketing anymore.” David explains. “I find that bands nowadays have to take the promo and marketing into their own hands. For instance, we are shooting a lot of footage on this current tour with Crowbar, Havok, Fit for an Autopsy, and Armed for Apocalypse for a video which will be the title track of our new album. People want to know all that they can about their favorite bands, so you have to keep in touch as much as possible.”

Since we are currently dealing with a number of issues domestic and abroad relating to viruses, diseases, hostage/terror situations, as well as a growing separation of the poor and rich classes, I wanted to find out what David feels the leaders of the world need to focus on over the next few years to steer things in a better direction for all. “What concerns me most is the sociopathic tendencies of the ruling class. How perpetual wars happen with seemingly no regard for the future in terms of our environmental policies. Our whole fiscal system is set up by these bankers to rob us blind and have no repercussions when it comes to them whatsoever. The whole system needs to go through a drastic overhaul, and we have to realize that there is strength in numbers. The majority of people are not millionaires, they are regular people who are just scraping by little by little. All of our freedoms are being taken away, I myself am worried about the social security system because for my mom and dad they’ll be fine, but for me I doubt the system will still exist. There needs to be a real changing of the guard, a lot of the policies in US, the conflicts we are getting involved with overseas. Hopefully more people through the internet or grassroots movements can stand up and take some of the power back.”

Certainly food for thought. Revocation are making the stages of the world their home, and it appears that the next 12 months will be full of activity once again. What are the current highlights on the two month North American tour with the almighty Crowbar? “The tour is going great,” David states. “We played Vancouver Canada last night and it was a packed house, now we are in Seattle (Washington) and looking forward to playing there. Chicago was really good, all the Canadian shows were great, Worcester is always fun because it’s like a hometown gig and we got to see some buddies that came out. We will finish up this Crowbar tour, then go to Europe with Cannibal Corpse for 6 weeks, do Singapore, Thailand, and China, and finish off the 2014 touring cycle in Australia. I am sure things will pick up in January and February of 2015 for touring. This will be our first time in China and Thailand, I’m really looking for it.”

And don’t be afraid to pick up the limited edition of Deathless, as it closes with Revocation covering one of the all-time classic death metal bands Morbid Angel. They chose to tackle “Sworn to the Black” from Covenant, embodying again the underground mindset that mirrors the band’s overall outlook on the scene. “That was just a great record,” David states. “In some ways “Sworn to the Black” almost kind of reminds me of “Deathless” – being a part of this death metal scene and the dedication to that kind of counter-culture or sub-culture if you will. This seemed to fit well with the theme of the album, and it’s just a ripping track. I remember seeing posters for their 20th anniversary celebration tour for that record – but we were on tour so I didn’t get the chance to check it out.”