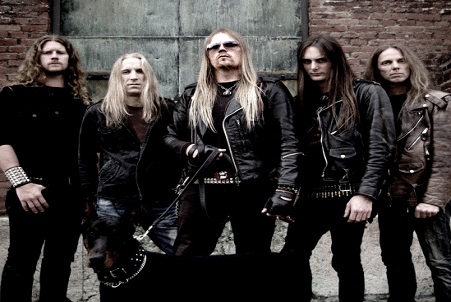 Situated firmly in the crossfire that is the retro metal movement, Gothenburg, Sweden’s Ram have paid their dues for the better part of ten years, culminating in the release of their third album, the fittingly-titled Death (Metal Blade). The band’s Maiden-on-Priest-on-Dio-on-MSG approach is as snappy as they come, providing quite the dosage of fist-pumping metal anthems, some even taking a quick jaunt into 70’s territory. It’s the logical step up from 2009’s formidable Lightbringer, and sets the Swedes on course for “world domination,” as singer Oscar Carlquist would frequently point out over the duration of our electronic mail chat. He’s a brash fellow, and when compounded with his take the various bumps and bruises the band has endured, as well as his interesting view on death, it’s better we pipe down and let the leather-adorned Swede do the talking…

Blistering.com: You formed in 1999 and have achieved some success with Lightbringer. Do you think this helped lead to your signing with Metal Blade for the release of Death?

Oscar Carlquist: Yes I do. But I think mainly because Metal Blade saw the quality in our songwriting and musicianship and the power of our live performances. Death was also recorded when we started negotiations with Metal Blade, so they had the chance to hear what the first release through them would sound [like].

Blistering.com: Much has been made about the Gothenburg scene and there’s usually a variety of different answers. What’s your take on the scene?

Carlquist: I don’t really know if there is a Gothenburg “scene,” we are definitely not part of any such scene if it actually does exist. There are a lot of bands from Gothenburg but they all differ a lot in style. Not much collaboration going on between bands that I know of. We collaborate with some Swedish bands that we feel a philosophical connection to rather than a musical one but none of them are stationed in Gothenburg.

Blistering.com: What were some of the things you took away from the period in which Forced Entry and Lightbringer were released?

Carlquist: Pride and tenacity, we really don’t care about anything but making and playing music the way we want to do it. When we started playing, 80’s-influenced heavy metal was more or less a joke to people, we would enter the stage dressed in leather and spikes and people would laugh…that just made us harder and more extreme, which drove us to take the whole thing a step further. Since we have always experienced this alienation to the metal scene and the music industry in general, we never felt the pressure to compromise with our sound or lyrical content this is our strength today.

Blistering.com: Did the band take its fair-share of lumps?

Carlquist: Sure, next year it will be 10 years since we released our first EP and It feels like it was yesterday. I still have the same drive, the same hunger, the same rage. I bless all the hardships that we experienced in those 10 years, member changes, problems with our contracts, idiot managers, extreme technical problems in the studio, and burglaries in our studio losing instruments and equipment for ten thousands of dollars. I bless all this since it never changed my drive and my passion for music, if it did anything to me, it made me stronger and arouse my lust for victory and revenge.

Blistering.com: Currently, there are a lot of metal bands playing an 80’s-influenced style. While most take nods from Maiden, I hear a lot of Priest and Dio in your sound. Are those some of the bands you leaned most on?

Carlquist: Yes definitely Priest and Dio are massive influences for us but so are Maiden.

Blistering.com: Also, there’s a nice 70’s rock edge to the album. Are the guys in the band big fans of this era?

Blistering.com: To these ears, the album sounds like it was constructed to be like a journey. Do you hope people will be able to take in the album in one sitting?

Carlquist: Your ears are correct, we always think in terms of making a sonic “movie” to include an array of different emotions and incorporate them in an order on the album that will create the sensation of watching an “inner movie” this is the first thing we start thinking about when it’s time to make a new album.

Blistering.com: Death is your third full-length and with a band’s third album, it’s usually when they hit their stride. Do you think you were able to do that here?

Carlquist: Hopefully yes, we want to able to do this fulltime, so that we can create even better music. We want to play all over the world, and bring the heavy metal tyranny everywhere. I know that this scenario is in the horizon. I will not be stopped.

Blistering.com: Death is such a simple, yet effective title. Why did you decide to name the album this?

Carlquist: “Death” is the ultimate truth, she stands here incorruptible and unstained by the lying world. I worship her for being a black monolith of true order in a sea off falsehood and indoctrination. States, commercial powers and organized religion are all my enemies because they try to dictate my world with lies. I know that I have found my own truth and in this truth, I will die. Death is there as a constant reminder to me what that truth is. She keeps me sharp and uncompromising with my own philosophies and my art. She brings me pride in the fact that I am ready to die for who I am and for this, I worship her and pray for her cleansing of the false world.

Blistering.com: One of the cool things about the new album is that it takes chances that most bands of your style wouldn’t, like with “Frozen” and and “1771.” How did these songs come about?

Carlquist: “Frozen” was written a long time ago by Harry. I like the way that it goes from this late 70’s doomy riff into a more late 80’s-style hard rocking. We knew that we had to have a heavy and epic song on this album so it fit in perfectly. I wrote “177” because I was sitting at my piano and had an urge to write something for my funeral. Harry then added his touch to it and we decided to give it a very rough production.

Blistering.com: Just so you know, a Dodge “Ram” is a very popular type of vehicle over here in the states. Does that concern you should you ever make it over to America?

Carlquist: Nope. We are called Ram for completely different reasons than why they call the car that so it doesn’t bother me at all.

Carlquist: It’s in the planning stages…world domination is at hand.

Blistering.com: Finally, what’s on the agenda for the rest of year?

Carlquist: Continue to bring the Heavy Metal Tyranny. We are going to go on tour and start working on a new album.