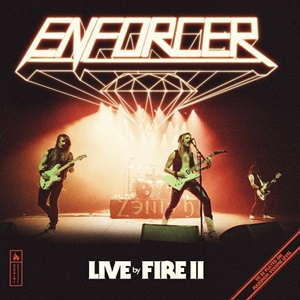 The shining stars of the current Swedish heavy/speed metal scene, Enforcer have circled the globe winning converts through their spirited, glorious material because of killer efforts like Diamonds and From Beyond. Six years after their first live record, we get the sequel in Live by Fire II from a headlining show in Mexico City during 2019. Many may think this is quite quick for another performance to unleash to their followers, considering Zenith was the only album released in that interim. Given the fact that 2020 and the early part of 2021 have been quiet on the live front because of protective measures from the pandemic, documents like this allow the energy and charge of in-your-face performances to keep the metal movement alive, kicking and screaming.

A healthy mixture of the five studio records makes the grade out of the seventeen tracks on display. Opening with a pair of cuts from Zenith, “Die for the Devil” and “Searching for You” showcase both sides of the group – the latter more of a mid-tempo, 80’s-level singalong while the latter features the speedier power shift side and the higher than helium vocals of guitarist Olof Wikstrand. Acknowledging the passion and fervor for metal in Mexico City during the introduction for “From Beyond”, you can hear the audience harmonizing with the guitar licks and chorus a la Iron Maiden – a consistent theme throughout this record. Taking a bit of a left turn with the dynamic clean to building riff movements for “Zenith of a Dying Sun” will remind many of Ronnie James Dio during his Rainbow years through the slower unfolding of the verses into dramatic melodies plus a thoughtful, bluesy lead break. The favorites appear throughout – at this point Enforcer can’t get away without playing “Destroyer”, “Midnight Vice”, or “Mesmerized by Fire” – all going down a storm as the crowd laps up every riff, slamming tempo, and endearing guitar harmony as Olof cajoles the patrons to be a part of the celebration. Shorter guitar and drum solos also provide brief interludes before the next song kicks in – the band delivering a 75-minute showcase of fierce power, speed, and traditional heavy metal that proves why they are headliners because of their consistency and attention to killer songwriting mechanics while executing at peak measures.

Back in the 70’s and 80’s, we couldn’t get enough of live albums that featured our favorites over a four or five album span of tracks whittled down to a single (or double) record outing. For today’s marketplace, Live by Fire II illustrates why Enforcer is at the top of their craft and recreates that old spirit, and hopefully has at least another solid decade or two in their creative bones to keep that fire burning strong.