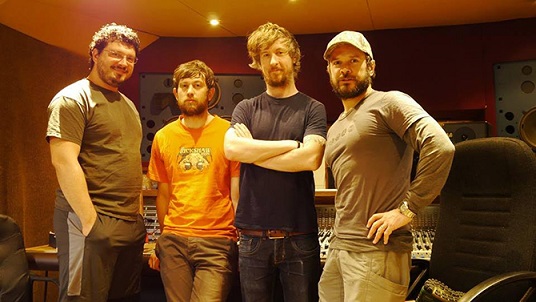 Existential questions abound with U.K. progressive metal outfit Monsterworks, but, perhaps none more pressing is this: How do they continually release an album every year of quality prog metal? Since 2011, the band has cranked out a full-length a year, putting to shame bands who take their sweet time in the studio (see: Guns N’ Roses, Metallica, Tool) while showcasing the vast and evidently endless songwriting skills of mainman Jon Higgs, who, in Monsterworks, simply goes by “Jon.” (That’s probably the only “plain” element of Monsterworks.) Their latest release Scale and Probability proves to be a more melancholic, moody affair, with the band blending complex arrangements with dark, sinewy riffs. Nowhere near the bottom-of-the-barrel in terms of songs, we hit Mr. Jon to find out why he’s so gosh darn productive. Read on…

Dead Rhetoric: Releasing an album a year…how long do you think you can keep this up?

Jon: I don’t know; until the well runs dry, I guess. No sign of that happening yet, though! The water is still pretty deep.

Dead Rhetoric: In order to meet this schedule, how far in advance do you plan the material?

Jon: Writing an album usually takes a few months to compile demos, a few more months for the band to rehearse and record, then another few months more to schedule mixing, etc. I tend to write new stuff all the way through, so the next album takes shape long before the current album is finished.

Dead Rhetoric: Are you the type of band to hash out material while in the studio, or, do you have it written before going in?

Jon: My stuff is demoed well ahead of the studio time so as not to leave too much to chance, but on occasion, there is material that appears more spontaneously. A few years ago, we might have come up with acoustic tracks on the fly; also, right up to the present, our bass player Hugo usually contributes a grind or black metal-ly song and this is often barely written, much less rehearsed, until the record button is pressed.

Dead Rhetoric: How much work do you take on yourself? Is Monsterworks the type of band where work is distributed evenly?

Jon: I generate enough source material to easily keep us busy so there is no particular need to call upon the other guys when it comes to the framework of an album’s songs – except getting a short blast track from Hugo as mentioned above. However, in the studio, everyone brings their skills to the table and, when it’s working properly, elevate the base material to something greater. I kind of do the groundwork – set the foundation – but the other guys are the artisans that raise the aesthetic.

That said, I truly hope the next phase of the band is more collaborative. Each member can potentially contribute a lot more at earlier stages of album prep. My dream is to make the perfect album – a Back in Black, Sad Wings of Destiny or A Night at the Opera – which I think will need more input at the creative level from the other guys.

Dead Rhetoric: Along this run of albums, are there any that stick out in particular? Or, any you wish you could do over again?

Jon: Good question. Each album is different and part of me/us. Whether it is a legitimate child or bastard spawn. Going back in time a bit, I have a particular soft spot for Spacial Operations (2007) which was the first concept album we did. I want to get that one remastered (unfortunately we lost the original studio project so remixing is impossible) to be more dynamic. I love the story and ebb and flow of that one.

The God Album (2011), the first with Marcus on lead guitar, also flows really well and sounds quite stripped back. The Existential Codex (2015) is our career defining double album (at least if you bought the physical release); maybe not quite The Wall, but it is another special one for me and probably my favorite sounding album.

In terms of redoing – two of the earliest albums (when the band was based in New Zealand) Dimensional Urgency (2001) and Rogue (2002) sound like absolute shit but I reckon the songs are solid and could be amazing if they were re-recorded. I actually hatched a plan to re-record Dimensional with the original drummer back in New Zealand but he’s got dodgy knees at the moment and needs to get that sorted first.

Dead Rhetoric: As for Scale and Probability, it has somewhat of a melancholic vibe to it. Was that intentional?

Jon: Not planned, no. It just happened that way. I tend to write a batch of songs and then close it off when I reach 40 minutes of solid material (which has been cut-up, worked and re-worked to get to that point). It just so happens that this particular 40-minute stretch was more melancholic than not.

Dead Rhetoric: What type of lyrical themes are you exploring?

Jon: The central theme of Scale and Probability is The Fermi Paradox. In a nutshell “Why, in a vast universe, have we not observed any other intelligent life?” The universe seems to be a lonely place, yet surely the chances of there being another intelligent species out there are quite high. I think that adds to the melancholy and perhaps I was influenced by the tone of the music, which was written before the theme was decided. Each song on the album explores a different possible reason for the paradox, from the inevitability of an intelligent species destroying itself, to the likelihood that other intelligences simply deem us unworthy, at present, of ascension to their exclusive club.

Dead Rhetoric: Given that Scale and Probability doesn’t fall into one specific genre category, is it safe to call Monsterworks a progressive metal band?

Jon: Safe, yes. I am comfortable enough with the ‘prog metal’ tag. We started off as more of a thrash/death band, but the prog has always been there. I kind of want to start going back to those basics but, at heart, I think I am just a pretentious wanker that writes intentionally alienating music. That said, I do like my music to have balls so you’re unlikely to find a lot of orchestration now or a keytar solo. But, never say never.

Dead Rhetoric: What’s your approach to live shows these days? Can you fit any in between studio time?

Jon: We haven’t played live for a long time. When we did, we tended to mine the shorter punchier tracks from the old albums. Since then, I have been writing longer and longer songs so any new live set could be quite different. It’s an interesting point because, for me with a finite time to dedicate to the band, it is just more satisfying to write and record new music which is immortal compared to a shitty basement gig to 15 people. Of course, you can never break out of the shitty basement gig circuit until you play a thousand of them and bust your balls building a following. I guess I hoped that one day we’ll get more attention through the sheer volume of (what I believe to be) strong material.

Jon: THREE new albums to work on! The first two are well underway. Even more exciting is the fact that we are all based within striking distance (maybe a 50-mile radius around London) of each other now. I have been away from the U.K. for a year, back home in New Zealand. The band is meeting up in person for the first time in a year tomorrow! Hopefully, that will be productive and get some enthusiasm going. My aim is to steer it more in that collaborative direction I mentioned.

Scale and Probability was actually completed under quite difficult circumstances. At least relative to all our other albums. I think it’s good and captures a different side of the band, but we can do a lot better and I learned a few things from the experience. So, the future is looking really bright. Who knows, we might even get motivated enough to put together a live set. But, let’s not get crazy.