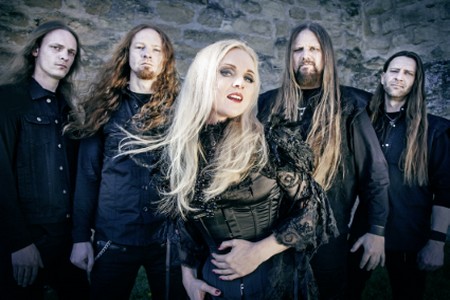 Making it more than a decade and continuing to grow with each album is one thing that keeps Leaves’ Eyes separate from most of the symphonic metal crowd. The band’s sixth album, King of Kings, is a conceptual album based upon Harold the First of Norway, and a testament to how far the band has come. There’s interesting dynamics, heavier influences, folk influences, orchestras, choirs, growls, and of course, Liv Kristine’s unmistakable melodic and operatic vocals.

Standing in a cornfield outside of her home in the southwest of Germany to battle connection difficulties, vocalist Liv Kristine gave DR a call to discuss King of Kings, increases in the heaviness of their last two records, a recent music video shoot, as well as some of her solo endeavors such as her involvement in The Sirens.

Dead Rhetoric: What can you say about the concept behind King of Kings? From what I’ve read, it sounds like you are giving some history lessons about your birthplace…

Liv Kristine: Absolutely right. I’ve always been into Vikings and history and the Middle Ages, the sagas. That’s always been my thing, in addition to historical languages. So history is my thing, and I have hundreds of books about the Middle Ages of Norway and the Vikings – it was just finding the right point of time to digging my nose into this for real. After we had released Symphonies of the Night, our fifth album, I was doing some brainstorming with Thorsten [Bauer], the guitar player and main composer of Leaves’ Eyes, and my husband Alexander [Krull]. Alexander is also the producer of the band, so of course he has an important say in the band in terms of production and theme. He said, “It’s all there, you just have to start researching.” And I did. That’s how this whole thing evolved.

Thorsten and Alexander started to compose music, we decided about the title of album – that it should be King of Kings, the main character: Harold the First, the first king to unite Norway in the 9th century. I started gathering information and putting everything into the lyrics. The composing process and the writing process went hand in hand. When I had thirteen chapters (for 13 songs) – when Thorsten and Alex had composed a new piece of music we sat down to discuss it. What kind of expression do we want in this song? What does this song give us? What kind of mood does this song have and what kind of lyrics does it need? It was a very constructive. We’ve been really busy for two years. We have evolved and progressed a lot when it comes to studio technique and to recording techniques – everything. Even when it comes to singing; I’ve learned a lot just through studying my own ways of singing and how to do certain things in a different and maybe better way. It’s been two years but it’s been fantastic.

Dead Rhetoric: I read that you have a Masters in Old English. Is that right?

Kristine: I did my Masters in Englistics, it’s called here at the university. It’s all about the literature and the linguistics of English. I have always been into historical languages, so Old English – that’s my thing. But I wasn’t allowed to write my final dissertation, which is a book of like 120-140 pages in which you have do research – I wasn’t allowed to write about any kind of theme connected to Old English. So I wrote my final dissertation, it’s called The Impact and Importance of Music and Singing in First and Second Language Acquisition. I did a lot of research with little kids and babies. That was amazing. I finished my Masters in 2003, two days before we were married [to Alexander Krull].

Dead Rhetoric: So you were already singing at that point with Theater of Tragedy or were you finished with them?

Kristine: Good question! I think I had already been thrown out of the band. Yeah, by the day of my wedding I had been excluded by the band, which was not my choice. Theater of Tragedy will always be very dear to me and I was one of the founders of the band. But this year, it’s a good year because I contacted Raymond [István Rohonyi], who was my boyfriend back then, and Theater of Tragedy was our thing. We were the founders of the band. So I gave him a call and I said “Ray, do you want to be my next special guest on my next solo tour?” And he said, yes he’d love to. So we are going to tour together so it’s kind of a reunion. That’s coming up in December.

Dead Rhetoric: I saw that! I actually was going to ask about that because I saw that you posted the setlist already.

Kristine: Yes we did! I’ve been playing Theater of Tragedy songs live, for my solo audiences, during my latest solo tours. Just a couple songs, and I’ve realized that my fans really appreciate it. I’ve been asked a lot of times about reunions, but I know that the guys, apart from Raymond; they wouldn’t do a reunion at this moment. If they did a reunion, they would probably do it with Nell [Sigland]. Which is fine for me, but still, that’s not the real Theater of Tragedy. So the only way for me to keep the spirit alive, and to answer the question of my fans with a big yes is to invite Raymond to join me on my solo tour. We have something really good and positive coming up. I’m really looking forward to this.

Dead Rhetoric: The last two albums, Symphonies of the Night and King of Kings seem a bit more ‘metallic’ than some of the earlier efforts. Is this intentional or just a natural progression of what you have been doing?

Kristine: Actually it’s a progression of what we’ve been doing. But somehow, for King of Kings, we realized that we wanted to have a very big and heavy sound. There are a few really heavy songs on the album. I love folk influences as well. We just let in any other influences and experiments that we wanted to. We felt very open-minded about it. But yes, this album has the biggest production that we’ve ever been a part of. We do everything by ourselves. We have our own studio here, just 50 meters from the cornfield here. Alex just told me this morning, some of the tracks, like “Blazing Waters,” the biggest, longest, heaviest, and most epic piece on the album – Alex had like 350 channels to submix and then mix and then master. For one song! We did the orchestra and the choirs and everything else too. It was huge. I would see this production more in the light of a soundtrack. It’s not just for the ears, I hope that our listeners/audiences will be able to dream a little bit – to get away from daily stress and dive into a completely different world. I think that for me personally, I think that’s our purpose – to escape from stress and dive into another world and have a good time. To enjoy and to feel comfortable. I hope that King of Kings will be enjoyed in that way.

Dead Rhetoric: I saw a picture on Facebook from your recent video shoot – was your son in the video as well?

Kristine: Yeah! Leon is 11, he will turn 12 this year. As Harold [the First] was put on the throne because his father died, it said in the sagas that he was between 10 and 11 so it was perfect. The whole family is in the video clip. He knows that we are performers, parents, and we have a lot of experience on stage. He knows this world, so to perform in a music video is nothing big for Leon. He’s like, “Okay, just give me fifty quid and I’ll do it” [laughs].

Dead Rhetoric: Your voice continues to get even better with age. Do you have any routines or techniques you follow to keep your voice in shape?

Kristine: I’ve actually just been very lucky. I’ve never taken any singing lessons. I’ve been equipped with two very strong vocal cords and perfect hearing. I never learned notes to read them; I know hardly anything about music theory. It’s sad and sometimes that I feel that it hurts to say it, but the whole process that when it comes to manners of singing and getting better – it’s all based on trying out different ways of using my muscles and vocal cords. Everything is based on experience. A compliment like yours, that’s something special to me so I thank you from the heart. Maybe someday when I retire I’ll take some singing lessons. Maybe [laughs].

Dead Rhetoric: You’ve accomplished so much in your career – Theater of Tragedy, Leaves’ Eyes, your solo work, etc. Is there anything big you’d really like to achieve in this point?

Kristine: If I could, I would like to tell the universe that I would really like to perform or sing together with Ozzy. Ozzy, Black Sabbath, that’s the music I grew up with. My parents are only 18-19 years older than me, so they were very young when I entered the world. I got this metal influence from my first day on Earth so if there is anybody I could say thank you, except for my parents of course, who always let me do what I wanted to do – it’s Ozzy. I would love to have the old, original LPs signed so I could return them to my father, with Ozzy’s signature. That would be amazing.

Dead Rhetoric: Is there anything going on or planned with The Sirens at this point?

Kristine: Actually I am going to meet the ladies next week. We have a show in Germany at Summer Breeze Festival. I’m meet them there and then two weeks later we will meet in Norway and we’ll support Nightwish. We have two really cool gigs coming up now so I’m looking forward to that. Anneke [van Giersbergen] recently released The Gentle Storm album. Kari [Rueslåtten] has an album coming out these days, and I have King of Kings, so all three of us are very busy right now. But I would really like to keep this live experience going for our fans. We have had some really good shows and tours together. It’s been amazing to be on the road with the ladies and to share the stage with them. I love them from the heart – I just hope we can keep this thing alive.

Dead Rhetoric: And maybe hit the United States as well…

Kristine: Oh yeah, definitely. I would love to!

Dead Rhetoric: What else do you have planned for the rest of the year, with Leaves’ Eyes?

Kristine: We have a few gigs coming up. A few single gigs, but a European tour is coming up. An acoustic tour in Germany. Of course we have to rehearse a new setlist and test out what songs we want to perform. Then there’s my reunion solo tour [with Raymond] coming up in December, starting in Russia. For next year, we are already planning tours. I hope that we will be able to do a US tour. That’s at least something I have planned. So stay tuned for good news!