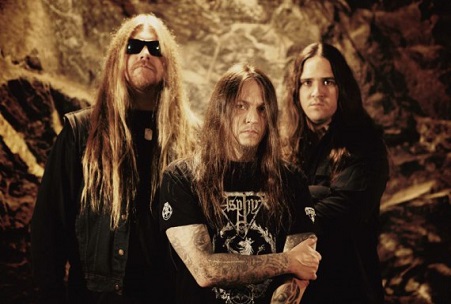 If there’s one thing Peter Tägtgren doesn’t want to be, it’s part of the “machine.” The thought probably sickens the Swede, and it should – in the late 90’s/early 00’s, his name was used as a regular selling point for fledgling  and even established bands, just because they had their album recorded at his famed Abyss Studios. The amount of hours and toiling Tägtgren put in during those days quickly soured him on the metal underground, prompting him to take a well-publicized hiatus from the studio, which was documented on 2002’s Catch 22 album.

Tägtgren has since been very selective with whom he records, done in part to accommodate his grueling tour schedule for not only Hypocrisy, but his industrial metal outfit Pain. In some territories, Pain dwarfs Hypocrisy, but not in North America, where Hypocrisy will be making a rare headline run this spring in support of their new End of Disclosure album. The album is a noticeable “back to basics” effort from the band, which falls short in spots, but also recalls the simplistic and earnest Fourth Dimension and Abducted days. Either way you slice it, a new album from Hypocrisy is sure to warrant discussion, which is why we roped in Mr. Tägtgren for a chat…

Dead Rhetoric: Before we dive into the new album, let’s go back to about 13 years ago when you were on the cover of Terrorizer magazine, which had the headline: “Is Peter Tagtgren the next Euronymous?” What’s your instant recollection of that?

Peter Tägtgren: [pauses] What can I say? For me, it was business as usual; I didn’t even look what people had to [say]. The studio was a big fucking McDonald’s drive-thru. It was closing down more and more…it became an industry and I became really stupid. Things were…you didn’t think anymore when you were producing bands, so that’s when I had to say, “This is enough.” Nowadays, I try to squeeze in a couple, maybe two or three productions to keep my brain fresh with ideas, and not try to go for sure things.

Dead Rhetoric: It seems these days you’re very selective with who you want to work with.

Tägtgren: The schedule is the thing that comes between everything. Nowadays, I tour a lot more than I did before. There’s not much room left for producing bands. Since most of the time, I schedule my life a year ahead, just to know I have time to do these tours or productions without getting a heart attack. A lot of things have changed since the mid-90’s.

Dead Rhetoric: With all of the attention you were getting around the late-90’s and early 2000’s, how hard was it to not pay attention? I mean, the Abyss brand was pretty big.

Tägtgren: No, not really. I was more stressed about trying to get the bands done so the next band could come in. I’m glad I live in a small village, a small town. During that time, there was not so much Internet, so I couldn’t see any demands, or read reviews or complaints. I was just in my world and doing what I was doing.

Dead Rhetoric: I watched the Live in Sofia DVD you put out a few years ago, and it seems like such a big jump from how you started Abyss, which was just with a 4-track recorder and some friends.

Tägtgren: Yeah, it was really hard work. It was bread and water, to say. I was just saving money all the money I got in, into the studio. I had my mind set on building a really good studio and becoming a good producer. That was my goal. If you know what you want to do, you keep on going…you get rewards after.

Dead Rhetoric: When did you develop a producer’s ear for things?

Tägtgren: I don’t know…maybe when I was a kid. Me and my brother [Tommy] were sound nerds [laughs]. We always listened to albums when they came out and listened to the productions and stuff. We didn’t know how they did it or why it sounded a certain way, but we could tell if it was good or bad.

Dead Rhetoric: That’s funny – KISS is one of your favorite bands and they’re not known for being exactly the tightest band in the world.

Tägtgren: Exactly [laughs]. I really like the roughness and primitive stuff in music and shit. As long as it gives me that right feeling, then it doesn’t matter how the production is or how people are playing instruments.

Dead Rhetoric: The big step was when you went from The Fourth Dimension to Abducted. Did you have that “a-ha” moment when recording that album?

Tägtgren: No, but I was stupid. After that was done, I felt it was time to move on. I bought a new amplifier instead of trying to squeeze everything out of the one I already had. It’s always been like that. I never wanted to be comfortable with something that I worked for. As soon as you work to get the ultimate guitar sound, I would go, “Okay, time to get something else!” Just to keep on searching.

Dead Rhetoric: Did other producers call you up?

Tägtgren: Me and Dan Swano had good contacts in the 90’s and stuff. He started working in a music store and he would hook me up with good gear and tips on what he did. But that was the only guy I knew that I could talk that was in the same distance. Like I said, I live so remote from big cities and where the big studios are, so it was really learning by doing.