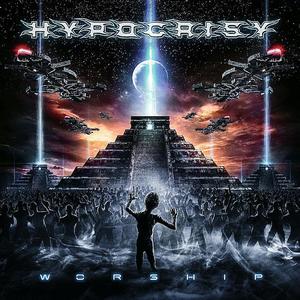 It’s been eight years since Hypocrisy’s last effort, End of Disclosure.  Mainman Peter Tagtgren is quite the busybody when it comes to the metal scene (most notably with his other band Pain), and there’s certainly a good chunk of folks who have been awaiting more material from his death metal side.  While there’s no real surprises that accompany this latest effort, but given the time span between releases and the more or less set groupings of tracks that the band tends to produce, Worship hits every note one could hope for.

The strongest Hypocrisy albums have managed to pull off melody and sheer aggression in equal parts, divvying up the tempos from fast/brutal tracks, mid-tempo stompers (that tend to really lean into the melodies), and some slower and gloomy cuts.  Virus still stands as the strongest start to finish Hypocrisy album (with the self-titled and Abducted sitting right behind it), and it’s hard not to think about that album with the energetic lead-off title track, which starts to work up quite an assertive grind after an enticing and catchy intro.  Urgent riffs and Tagtgren’s immediately noticeable growls are a quick reminder of why the band’s output was missed as they tear through the song, sprinkling in a few choice melodies as the icing on the cake.  Follow ups “Chemical Whore” and “Greedy Bastards” serve up those addictive mid-tempo riffs that are equally chunky and ear-tickling.  Those seeking the slower side of Hypocrisy will not be disappointed by “We’re the Walking Dead” and “Children of the Gray,” which bask themselves in plodding riffs caked with flowing melodies and cinematic atmosphere that dances across the runtimes.  But the second half picks things up once more, with visceral and driving cuts in the form of “Another Day” and “They Will Arrive” to hammer away at the listener and get the necks working overtime.  There’s something to be said for the placement of tracks to really enhance Hypocrisy’s flavor, and it makes Worship a very speedy listen for a 50-minute album.

There’s only one Hypocrisy out there, delivering death metal that’s both memorable and pummeling in equal turns.  Worship sits as one of the band’s strongest releases, easily the best since Virus, for its sheer ability to cash in on all of the flavors of the band that have come to light over time and turning it into a very cohesive and catchy wrecking ball of an album.