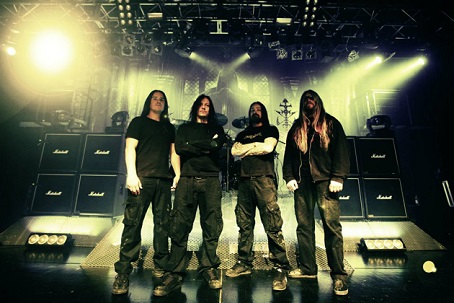 Dead Rhetoric: As for the new album, what’s your take on doing albums now? Are they a necessity now? You have such a large back catalog, so I’m curious if they’re something you simply “get around” to doing now.

Tägtgren: For me, it’s never been about money, because then I’d have another job a long time ago [laughs]. It’s important to document my ideas every year or every other year. I’m probably always going to write and record stuff, and if no one wants to release it, I’ll still do demos. It’s such a good ventilation to write music for me. It’s great therapy.

Dead Rhetoric: Did you ever think Pain would get as big as it is today? In Europe, you guys are pretty prominent.

Tägtgren: When I started, I was sitting with a computer and I had no clue what I was doing. That was the producer side of me. Pain has had a lot of different musicians in the band, coming and going, but for the last five or six albums, it’s been the same lineup, so I think that helps people understand it’s not just a studio project anymore. That helped, as did being active and touring a lot in Europe. I never got any support from the American labels. I just don’t know if I should…if I go in America, I really have to invest so much money to bring it up to the level that it is in Europe. I don’t know if I’ll do it. I haven’t made up my mind. It would be great to have a record company to support it.

Dead Rhetoric: Some people here still see Pain as your Hypocrisy side project, whereas in other countries, it’s the other way around.

Tägtgren: Yeah, in America, they’ve never seen Pain. They will be surprised when they see it. They might think it’s danceable pop music with distorted guitars, but live, it’s much more than that [laughs]. I believe if I take that step and start investing in America, it will definitely catch some eyes and ears. If I can find a good tour that would make sense for Pain, I would definitely do it. It would take a couple of tours, but hopefully we can harvest what we sew.

Dead Rhetoric: One of the quotes I read about for End of Disclosure was that you wanted to go “back to basics.” Some could make the argument you already did that with A Taste of Extreme Divinity. So, what were you going for by saying this?

Tägtgren: In a way of the simplistic riffing and melodies and stuff like that. Not try to show we could play our instruments. It’s more to check out that we’re good songwriters. It’s really hard to write simple songs to make them good. That’s what we did in the 90’s…we didn’t know better. That’s what I wanted to go back to – simple riffs and melodies that stick in your head. It doesn’t have to be a professional to play it. It could be like AC/DC.

Dead Rhetoric: The title track is simple, “44 Double Zero,” those type of songs make sense after you say something like that. How did Horgh [drums] and Michael [Hedlund, bass] react when you told them you wanted to go in this direction?

Tägtgren: I didn’t say anything, I just wrote it [laughs]. They really liked it. They were really pleased with it, but I don’t know if they were thinking it was more simple; it just sounded like typical Hypocrisy. I didn’t want to reinvent the wheel with Hypocrisy.

Dead Rhetoric: Having a guy like Horgh around, how much do you resist the urge to turn him loose?

Tägtgren: I remember when we first got him into the band and I wrote “Warpath.” It was a black metal-meets-death metal. I know he could play that kind of style. That influenced me to write when he came into the band, but now it’s time to go back and write more simple-sounding songs and stuff. I don’t know if it’s right or wrong, but in Europe, it’s gotten a lot of good reviews. Hopefully the fans will like it as well.

Dead Rhetoric: You’re due over here shortly and you’re doing some markets you haven’t played before.

Tägtgren:  I think the thing is with the album, I just said I’m not going to have expectations at all. I’m happy with the thing; I’ll be happy if some people come. But if more, great!

Dead Rhetoric: In contrast to Pain, you have put in the work in North America. I think you’ll be okay.

Tägtgren: Yeah, I hope so too [laughs].