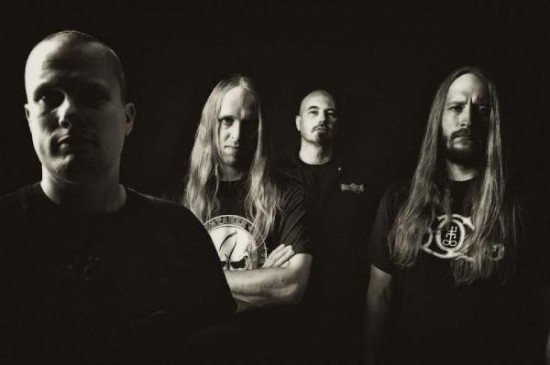 Wasting little time after last year’s crushing Passiondale, God Dethroned are back on the battlefields with Under the Sign of the Iron Cross. If the band’s track record has proven anything, it’s that mainman Henri “The Serpent King” Sattler’s penchant for song-oriented and concise death metal will never go out of style. And if it did, no one has told the affable, bald-plated frontman. The band’s music has steadily grown more regimented since their untouchable Bloody Blasphemy era, but those crunchy riffs and steady stream of melodies are pure God Dethroned.

Having long ditched the anti-religious angle that permeated their earlier works, war stories of World War I now comprise the band’s lyrical scope, and it’s refreshing, even educational to a degree. Sattler’s deft research and ability to channel it to God Dethroned’s well-oiled death metal machine is still a marvel, even after nearly two decades in the game. Since Blistering rocked to “The Execution Protocol” more than anyone can count, it was nigh time to snag Sattler for a round of interrogation, as well has his plans for next year, which apparently include lots of boozing. Can’t blame the guy…

Blistering.com: Why such the quick follow-up to Passiondale with Under the Sign of the Iron Cross? Did you start composing new material right after Passiondale’s release?

Henri “The Serpent King” Sattler: No we didn’t. First, we did a lot of touring for Passiondale and last march i started writing the new album, right before we embarked on our second US tour for Passiondale. We came back in May and I finished the album. As always, the songs are very spontaneous and not lifeless as they would become when we would rehearse them over and over before a recording. Working under pressure always works well for me. We didn’t have to do the album now, but according to Metal Blade’s release schedule the next opportunity would have been around June 2011 and I just didn’t want to wait that long.

Blistering.com: Considering you had a few line-up changes, was it more difficult to get things together for the new album?

Sattler: No not at all, since I’m the only composer on this album. Actually most of all our material comes from my hands usually, so line-up changes don’t affect the creative process in our band.

Blistering.com: How are the new members working out and at this point, do you wish you could find some line-up stability?

Sattler: We usually have pretty stable line-ups usually. It’s just that the drummer and guitar player hasn’t been the same person on the last three albums. Normally people stay in the band for around four to six years and play on three to four albums. People tend to overreact a little on the line-up changes that we had lately.

Blistering.com: Do you still keep in touch with previous members of the band, like Beef [bass] and Jens [van der Valk, guitars]? Back in your early days, they seemed to be awfully important to your sound…

Sattler: You’re right, those two guys and Roel [Sanders, drums] were part of one the bands special line-ups during the highlight of our career. They had distinctive playing styles and skills. But yes, I’m still good friends with them and as a matter of fact, we are going to play together again on Christmas Eve. That night we are having our CD presentation show and part of that show is a reunion show with some old band members to celebrate our 20th anniversary. We’re also going to play some songs off of the Christhunt album with original guitar player Oscar Carre. He’s been our sound engineer for quite some years now and it’s gonna be fun to share the stage with him again soon.

Blistering.com: As for the new album, you’re continuing with the war-theme you started with Passiondale. What war stories from World War I did you explore for Under the Sign of the Iron Cross?

Sattler: The Schlieffen Plan which is the German attack plan for the war, based on an ancient attack plan (from before Christ) by Hannibal to attack the Roman army. Even though they lost the war, the plan worked astonishingly well. This is also the title track of the album. Then there’s a song called “The Killing is Faceless” which is about the battle of Verdun. For Americans this is probably completely unknown stuff, but for Europeans it is not. The song “The Red Baron” should ring a bell, though. I guess everybody heard about this guy even though they may not know that he was a legendary German fighter pilot during that war.

I also was inspired by the book Storm of Steel by Ernst Juenger, who fought in the trenches himself and wrote a diary about that. It’s almost unbelievable that he survived the war if you count the number of times he nearly got killed. Apart from the song “Storm of Steel,” also “Fire Storm,” “Chaos Reigns at Dawn” and “On Fields of Death & Desolation” were based on this diary.

Blistering.com: Why is this particular war so fascinating to you?

Sattler: I’m fascinated by history in general and I ran into this subject by accident. I used to party a lot with our former guitar player Isaac Delahaye who lives in Ypres in Belgium. This town happened to be in the frontline of that particular war for four years and you can find many war memorials and war cemeteries there. It intrigued me so much that I decided to write a concept album about that. Then when the critics on the Passiondale album were so great, I knew I wanted to continue this. Not many bands write about World War I, which gives me plenty of opportunity to write without limitations. So now I decided to make it a trilogy.

Blistering.com: God Dethroned’s earlier albums dealt with a religious angle, but now it seems like you have tons of ideas to choose from in dealing with wars. Is that how you feel?

Sattler: Only the first couple of albums dealt with religion a lot, and although we kept it on many albums, we slowly started to integrate more different topics as well. I felt at a certain point that I said what I wanted to say about religion, so we started using other topics as well. This whole war theme came by accident and a few years ago I couldn’t have imagined that we would use it as much as we do now.

Blistering.com: The title track might be one of your impressive songs to date; it’s incredibly melodic and epic. Do you prefer doing these type of songs over the traditional, brutal death metal songs?

Sattler: I think we always had our epic songs like “Nihilism,” “Poison Fog,” “Soul Capture 1562” and “Under a Silver Moon” to name a few. Apparently, this song is just better than the other ones, so I just take that as a big compliment . Apart from that I think that our new album is very brutal, so I guess I just like the mix of those two elements.

Blistering.com: Where do you think this song (the title track) ranks in terms of your previous epic songs like “The Execution Protocol” or “Under A Silver Moon?”

Blistering.com: You’re still one of the few bands that play a song-oriented brand of death metal. What do you think of current death metal bands that favor technicality over memorable songs?

Sattler: I’m old-school, but that doesn’t mean that those bands are not doing a good job, it’s just different. Time will tell how many of the newer bands will still be recognised by the audience in five-to-ten years from now.

Blistering.com: Any plans to make it over to North America next year?

Sattler: We’ll see, it depends on the offers we get, but as we like the States a lot, it would be a great thing to do.

Sattler: Getting drunk quite a bit I suppose…