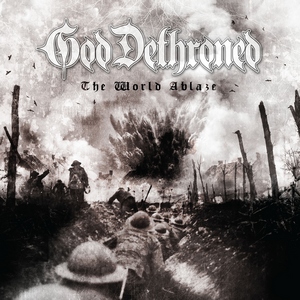 Not playing it straight when it came to death metal always kept God Dethroned in the game. Which is why it was unfortunate when the band hung up their hats a few years ago. Thankfully, they got back into the game and The World Ablaze gives us the first sampling of new material since 2010’s Under the Sign of the Iron Cross. Picking right off where they left off, they complete their WWI trilogy on a high-note.

The World Ablaze does not sound like an act that has been hibernating for the better part of a decade. Instead it sounds refreshed and hungry. As if God Dethroned decided that they needed to prove something to themselves, and in doing so, smash the bar that the previous WWI-themed released raised. Utilizing a familiar feeling of death metal mixed with some black and thrash elements, what gives it a more youthful feel is the variety of tempos that the band attacks with. They’ve lost none of the snarl they used on their last album, but melodies are interwoven through the tracks without mellowing the attack. Some of these are, quite frankly, gorgeous melodies (“Escape across the Ice”) and really give some additional depth to the songs. The frequent movement from all-out blasting chaos to mid-tempo grooves (and sleek melodies) make sure you are glued to your seat as you listen, as will the enjoyable WWI lyrical content.

Hard to argue with anything that God Dethroned has done with The World Ablaze. Not only have they maintained their high-standard from previous efforts, they’ve gone and one-upped themselves and delivered a strong closing to their WWI trilogy. There’s a willingness to be flexible and adapt to the times without abandoning the core sound that built the band up for so many years that’s just plain admirable. May they continue to conquer.