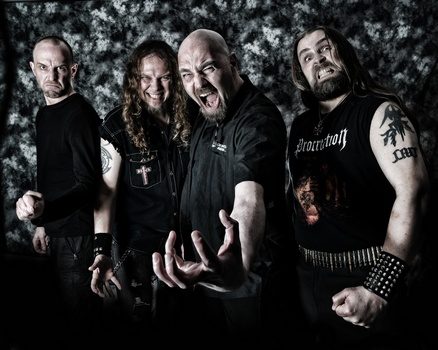 Always a persistent (and consistent) force in extreme metal since their 1992 debut The Christhunt, God Dethroned should be a recognized name at this point in their career. Always moving forward and enhancing their sound without compromising it (nor allowing it to become stale), they seemed to hit a high-water mark with their two WWI-based albums, Passiondale and Under the Sign of the Iron Cross. But then the band split up in 2012, though they would reform again in 2014.

That means that the world has been without a God Dethroned album for the last seven years. But that time is nearly over with the rapidly approaching release of The World Ablaze. Finishing off their WWI trilogy, the band picks up precisely where they leave off while keeping things up to the times. It’s precisely that reasoning that we grabbed guitarist/vocalist Henri Sattler for a few minutes of his time to discuss the album’s themes, approach, and where they go from here.

Dead Rhetoric: Was there something about the 70,000 Tons of Metal gig that made you rethink putting the band to sleep? It seemed to have book-ended the finale and reformation of the band.

Henri Sattler: No, it was something I wanted to do. When we stopped the band, I wasn’t sure if I needed a break or if I was just fed up with it. It felt like I was fed up. I needed some time for myself; I needed to reorganize some things in my life. At a certain point, the man who signed us, Michael Trengert, died of a brain tumor. I went to his funeral and on that day, I met the guys of Amon Amarth and many other bands…as well as the guys from Metal Blade and Nuclear Blast. That day I realized how much I missed it. I realized how much music was a part of my life, and I missed the guys I used to see on the road. So we decided to come back together, and I thought it would be awesome to start again at the same place we ended in 2012. So we contacted the crews and they said we were very welcome [to play]. So that’s how we managed to start there again. I think it was a great moment – something that you can’t plan ahead, but something you wish to do because it feels right. When we entered the stage, the crowd welcomed us like Iron Maiden had come on stage, so that was really cool.

Dead Rhetoric: I’m sure that helped with the decision to come back.

Sattler: Very true. After that, we played shows and festivals for two years. That’s the advantage of having a reunion. Many festivals think that’s a good reason to have you play. So that worked out very well. Then our booking agent said, that if we wanted to go on like this, it was about time to start thinking about a new album. I wasn’t really prepared for that, since I enjoyed playing live. I didn’t feel the need to record another album – I thought that if we could [just] play live its fine by me. But that’s not the case – so we talked to Metal Blade. So they said we could do a new album, and this is the deadline. Then all of a sudden we had to rush, well not to rush, but it put a lot of pressure on us. But it was a good thing. We tried to write some songs earlier and nothing came out – because there was no pressure or need. Now there was this deadline and it made me very creative. Ideas started to come, and before we knew it the album was finished. Of course, we had to – we couldn’t take much longer, but it came naturally, and that’s what is necessary to create a good album. If you have to force yourself, that’s usually not a good sign.

Dead Rhetoric: Before the band had stopped in 2011, you had stated that you were doing a trilogy of World War I records. You had done two, so did it seem like a logical place to start by wrapping up the third part?

Sattler: Definitely. When we did the first one, Passiondale, it was a big success. We originally wanted to do only one album, but people liked it so much we decided to do another one – there’s so much to tell about that war. So we did the second one, and I guess by accident said in an interview that we would probably do a trilogy. Then it was like, there’s no way back anymore. But it’s not a bad thing – people really appreciated the lyrics that I wrote for those albums. So I knew which direction to go. But on the other hand, writing 25 songs about the same topic is also kind of hard. I have been digging a lot to find things that are interesting to write a song about, but I think I managed and we’ll see what the fans say once it’s out.

Dead Rhetoric: What were some topics of the topics you tackled this time?

Sattler: One song [“Escape Across the Ice”] is about the Russian Revolution. Russia had a Tsar until 1917, and then there was a revolution where Lenin came to power with the Red Army. I felt like that was quite a story, because everyone has heard about the Red Army, but no one hears about the White Army. The White Army were the troops that were still loyal for the Tsar, that fought for their own independence in Russia, so I thought it was an interesting topic to write a song about. There’s a song called “Messina Ridge,” which is about the biggest man-made explosion before the Trinity Bomb, which was the first nuclear explosion in Nevada. This explosion happened during WWI – it was a place where the Allied forces couldn’t pass so they thought if they blew up the hill they would have a clear road ahead. They put so many explosives in the hill that they could feel the shockwaves for miles away. I thought it was also an interesting topic as well. Some songs are more about telling a story about what someone goes through on the battlefield, so it’s a little more anonymous, but it felt right for the song. Sometimes it’s better to use your imagination more, than to write about something that’s not really interesting. There’s so many things that went on – it has to be an interesting topic. You can write other things about WWI, but it’s not so clear.

“The 11th Hour” is about the end of the war – it’s the final song on the album. The war was officially ended at 11 o’clock in the morning on the 11th of November, so it was the 11th hour of the 11th hour of the 11th month. But in reality, the armistice had been signed at 5PM [the night before], but some Allied officers thought it would be good to conquer some more ground for the statistics, so they sent many troops out to war on the final morning when it wasn’t even necessary anymore. That morning, 20,000 soldiers were killed for no reason basically – that’s what the song is about. I thought it was shocking to read about as I was doing research about the final day of the war – to find out so many people had been killed, just for the statistics, it’s really weird. There were a lot of really weird things, if you read the war propaganda for WWI, it’s unbelievable how they tricked some people into the battlefield.

Dead Rhetoric: With the trilogy complete, do you think it’s time to jump into different waters in the future or do you want to continue, with maybe a different war? Or is it too early to decide?

Sattler: I’ve thought about it, and many people have asked me about it…but it’s a bit hard to say right now. I have no clue what to write about, first of all. I guess it’s important to know if people like this album. If it has some sort of success. If I look at our shows from the past two years, then I can tell that there was some growth and interest for our band. The three year break has done good things for us. Looking at that, it should be fine. But to think about a new album before this one is out – it’s a bit early. I don’t know what to do – the war themes have worked out well for me from a lyrical point of view, but maybe it’s time for something else as well.

Dead Rhetoric: Is there anything different you added to The World Ablaze to make it stand apart, or do you feel it’s more about staying consistent to God Dethroned’s music, given the seven year interval between albums?

Sattler: It’s actually both. First of all, it sounds typical for God Dethroned…it’s in the riffing [style] that I do. The riffs I’ve composed have a certain timing and a certain way of playing that is typical for me. Since I have written most of the songs on most of the albums we have done, it makes it consistent. On the other hand, we also felt that this album should be more dynamic than the last one. Under the Sign of the Iron Cross is so fast and extreme that when you play it live, people don’t know what to do anymore once you reach a certain point, because it’s so fast and aggressive. So we felt the need to write an album that is more diverse and dynamic, with more mid-tempo and headbang parts, but also still keeping the blast beats and fast parts. I think it’s a good mix between all those things. It also reflects our career a little bit. There are parts that refer to the older God Dethroned albums, parts that refer to the middle era, and parts that refer to the later albums. In that sense, it’s a very diverse album I would say.

Dead Rhetoric: Is it easier to keep to the vision of the band with you being the major songwriter?

Sattler: It is, and that’s how the other band members feel about it as well. They wanted to contribute to the new album, and they were very cool about it. They said, “We’ll write riffs and give them to you and you just take what you like. What you think is good enough, take it…what you don’t think is good enough, just throw it away.” They could put their ego aside just to be able to contribute the new songs. That was really cool, and it worked out very well. For them, it’s very difficult for them to write something with my timing and my feeling. They know that if they write something very typical for them, they know it might not always fit with the riffs that I compose. But nevertheless, they came up with a number of ideas and a lot of it fit. Some things had to be changed a little bit, but all in all it was a very good cooperation.