Ghost Brigade – This Place Has No Meaning 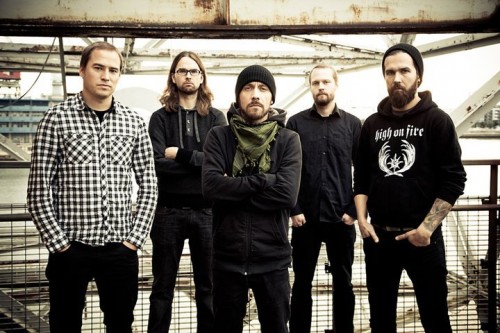 The album is dead…long live the album. Metal is not immune to a world of compressed MP3’s, singles, and filler, filler, filler – let’s not kid ourselves. In a genre so not driven by hit songs, it’s becoming increasingly rare to find long-players that warrant an entire listening experience. Even in our attention-span deprived society, if such things still did exist, no one would probably care. Sorry to rain on one’s parade.

For 2009, which has emerged as a robust, yet bemusing year, the top album is more than likely going to be Ghost Brigade’s Isolation Songs. You see, it’s everything an album should be – dramatic, a crescendo here, a crescendo there, crushingly heavy and sublimely melodic. The thing doesn’t quit – no filler, all killer (sorry for the Sum 41 reference, guys). It’s the type of album that pushes onto playlists and stays in one’s CD player or iPod. It cannot and will not be denied.

More important to this notion is how much this Finnish sextet has grown from its 2007 debut, Guided By Fear. We’re talking canyon-jumping bounds here. When such a thing happens, us metal journos can’t help but get a verbal hard-on. Wille Naukkarinen [guitars, primary songwriter] caught up with Blistering to discuss the world-beating Isolation Songs and good thing this was done via email – we probably would have made the man blush…

Blistering.com: Isolation Songs is a tremendous, tremendous leap fromGuided By Fire. Are you aware of how much the band has improved?

Wille Naukkarinen: I remember when we were rehearsing these songs I often had this feeling that I can’t wait to go and record this album and show everyone how much the band has progressed. But I guess the real eye-opener was when we had the finished master in our hands for the first time and we listened to it and then listened to Guided By Fire. I clearly remember saying to the other guys in the band that I think GBF sounds like a demo compared to this new one. Maybe that was a bit too radical comment to say but I guess it at least shows how pleased we were and still are about Isolation Songs.

Blistering.com: The metal press has suitably been impressed by giving the album great reviews. How does that feel or does the press’s reaction even matter to you?

Naukkarinen: The reactions we get from the press or record buyers don’t have an impact on our doings but I’d lie to you if I claimed it didn’t feel good to hear and read all those positive comments. Of course it does. It took almost two years to write these songs so it’s always nice to hear and meet kindred spirits who like and understand our music. It’s very motivating.

Blistering.com: In regards to Guided By Fire, it’s a quality album, but a little hit-or-miss, so what lessons learned from did you use to apply to the new album?

Naukkarinen: One of the main things we learned was that ”challenging” and ”too difficult” are not the same thing. What I mean by saying this is that on Guided By Fire, some of the parts were almost too difficult for us to play at the time so it wasn’t a very pleasant experience to sit there for hours and try record something you can’t almost even play. We luckily got everything on tape in the end so it’s cool, but I wouldn’t do it again. It was a very difficult record to make.

This time we simplified everything a little bit and that’s why there’s a better groove on this record. And of course we are a little bit better players than we were two years ago. We also learned that you don’t need to have six guitars on top of each other all the time. If you want to flirt with dynamics, the trick is not how many guitar or vocaltracks you have recorded, but how many tracks you have guts to delete. So there is actually less guitar tracks on Isolation Songs and less vocals too but at the same time it sounds bigger and well, better. This new record breathes whereas GBF is almost too full of everything.

Blistering.com: Going into album #2, was it pre-determined that there would be more of a focus on clean vocals, dark passages, and more melodic songs?

Naukkarinen: Absolutely not. We never plan these things. The songs just kind of write themselves and clean

vocals just seemed to fit some of these songs better than growling and I just happened to write more melodic songs. Manne asked us for example if he should scream the chorus of ”Into The Black Light” but we instantly said no because it would’ve kind of made the song sound ”cheaper.” So that song ended up having only clean vocals and it’s one of our favorite songs on the record. And I really hope that we’d use a lot of clean vocals in the future too because Manne has a good voice in my opinion so it really would be a shame to not use it.

Blistering.com: Lyrically, the album appears to have a vague, but positive message to it, especially with songs like “Into the Black Light,” yet “Secrets of the Earth” has a foreboding message to it. Care to elaborate?

Naukkarinen: I can only speak for myself here as I have not talked to yet Manne about the themes he sings in his lyrics. I wrote lyrics for three songs on this new album and those are very personal, self-observative stuff. Little stories about a search for happiness and harmony in life. “Into The Black Light” is actually one of them and I’m really happy to hear you have noticed the positivity in it. You are actually one of the first ones to say it, so this definitely made my day. I know a lot of people think our music is sad and almost depressive, but the thing is that if you dig deeper and read between the lines, the messages are often very positive.

Blistering.com: Do you agree with the assessment from fellow Finnish metal bands that the country’s climate plays a significant role when creating music/writing lyrics?

Naukkarinen: Hmm… I don’t really know. Maybe to some extent but I’m pretty sure I’d write this kind of music regardless of the country I’d live in. It’s maybe more the result of typical Finnish mentality that drives us to make melancholic music. It’s not so much about the climate in our case.