Delain – For the Glory 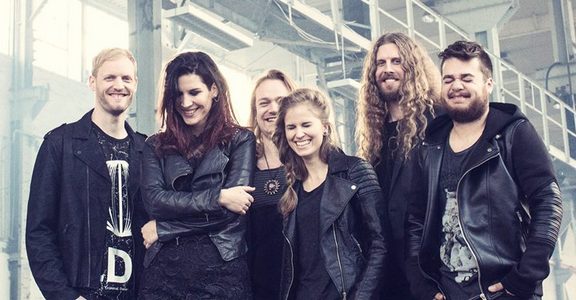 They often say good things come to those who wait. Consider Delain as having the patience and fortitude to have those good things come their way over time. In terms of a North American presence, the band put in the effort – supporting a number of acts over the past few years, and now they’ve been able to work their way up to a co-headlining run with Hammerfall. And it couldn’t have come at a better time.

Delain’s last album, 2016’s Moonbathers, may in fact be their strongest effort yet. A satisfying blend of songs that offer bombastic synths along with hook-based sensibilities, Delain’s songwriting appears to be at its sharpest. Bringing a handful of these tracks along with them, they have a mix of new and old that is sure to please long-time fans. Naturally, DR was curious to get some more information from the band, and vocalist Charlotte Wessels was kind enough to take a few minutes from show prep to give us the rundown on the band’s recent activities.

Dead Rhetoric: What made this the right time for a North American headline run, following the support tours that you have done?

Charlotte Wessels: The first time we came over here, we were told that it was hard for European bands to come over and tour the US, and you need to do at least 5 support tours before you can do your own tour. I guess some people thought that would discourage us, but we did the first tour a few years ago and we’ve been coming back every year since. We were actually able to do this tour after 4 support tours, so we cut it one short. The timing was good, and when I look at the numbers and everything, I think it was the right time.

Dead Rhetoric: You’ve mentioned that Moonbathers was written in different chunks, due to the band’s hectic schedule. Do you think that this is the way forward?

Wessels: Yeah, and I think it might even be more extreme by really taking it one song at a time. Write it, record it, and mix it – then move to the next one. It worked for the previous album, so we are eager to explore what else we can do with it –whether it will give the songs more time to flourish or if we will miss the ‘album process.’ So for the next one we will explore that possibility even more. Even if we end up running back screaming towards the other method [laughs]. It’s always good to keep trying…especially with the touring schedule that we have now. It’s very hard to just take a few months off and write a complete album. Since we can still get the creative juices flowing, even in shorter time frames, I think this is a way that might work for us.

Dead Rhetoric: Unfortunately I’ve had to miss those opportunities that Delain has done on support runs but was finally able to catch two shows – New England Metal and Hardcore Festival and then New York City. One thing that comes to mind when watching your live show is just the number of smiles on stage. It seems you avoid that stoic, metal mentality…

Wessels: That’s true. Of course, I have my moments, especially when we perform songs with darker lyrics, I really get into that. In general, I really like being on stage and I really like performing. We want the audience to leave with a smile on their face as well. It’s very light-hearted in a way, we want the shows to be a party. There are moments to dive into the emotional contents of the songs and be serious…I also know bands that take things very, very seriously but that’s not really our style. I think you should always be able to laugh with your audience. I think that’s a good thing.

Dead Rhetoric: You’ve had pretty consistent artwork through the years – does Glenn Arthur have a special place with the band at this point?

Wessels: Definitely. I think that by now, his style is very much our style. For example, the hummingbirds. They are very much his trademark bird in his art, but a lot of people are getting those as tributes to Delain, so his style is infused in our visual language. We are very happy about that. I loved his work years before we started to work with him and I was very excited when he decided to jump on board with We Are the Others. I’m also very happy that he has been contributing ever since.

Dead Rhetoric: You’ve also had a long relationship with The Sophie Lancaster Foundation, most recently with donations from your PledgeMusic campaign. What are you most proud of accomplishing with them?

Wessels: I’m very excited about the ongoing work that they do. Not only in schools – educating both potential bullies and people who are potentially being bullied. But also, they have been making real progress, for example, with the Manchester Police, who are now treating violence against people of certain subcultures as hate crimes.

I hear you say, “Why is that important?” The thing is that it happens a lot over there – people with alternative dress styles; there’s still a lot of violence against them. Since it hasn’t been recognized, or the reason hasn’t been recognized, all cases of it have been put aside as singular incidents. There’s no education, and the police force isn’t trained about how to deal with it. So it’s been a consistent problem there. So now, they have actually achieved that [filing it as a hate crime], and they are looking into it as a category of its own so they know how to deal with it. It extends way beyond the alternative community. Any kind of work that has been done in that corner, it really benefits the queer/gay community or any other community that has violence against them, for any reason. They are working really hard and I’m super proud of the many things they have achieved, and happy to contribute to it through the campaign.

Dead Rhetoric: You did some Lemmy memorial gigs in Holland over the holidays – how did that come about? How did you get involved?

Wessels: I was asked by one of the singers who organized the event. They went to our old booking agency and asked if they knew someone who would be interested and they actually suggested that I do it. I have no idea how they knew that I’m a Lemmy fan but it worked out wonderfully. It was great to be able to give that tribute. I was privileged enough to have met him a few times…he was a great dude.

Dead Rhetoric: I’ve heard that it’s hard for you to sleep on a tour bus – how do you stay functional over a long tour?

Wessels: I must say, I’ve been sleeping pretty well this tour so far. On previous tours, I’ve gone nights without sleeping and I would just read books. At least I could relax – better to do something that doesn’t take a lot of energy than to lay in your bunk staring at the ceiling thinking “Sleep, sleep, sleep!” So I would just distract myself by reading something, but I’m very surprised with how well as it’s been going. I’ve been sleeping as well as one can sleep on a moving bus so far.

Wessels: Yeah, progress [laughs]! It will come in handy if I want to stay in this job for a while.

Dead Rhetoric: In terms of your own poetry/writing – it has interwoven with the band through lyrics with Delain and Phantasma, but do you get a different sense of accomplishment from writing versus music itself?

Wessels: Yeah, I do. I have a thing for stories in general. I’m only happy with a lyric if it really tells a story. Sometimes when you put away a good book or see a good movie, you feel like it changes your life a little bit, because you lived the story through someone else. I think that’s one of the most beautiful things in the world. When I experience something when I’m super impressed with art, I want to do that myself as well. If I read a very good story, I want to get my own stories out as well. It’s a different sense of accomplishment than writing music, but it’s definitely interwoven with it. The combination of the two is my favorite for sure!

Dead Rhetoric: One of the strongest tracks on Moonbathers, I feel, is “Chrysalis.” Could you go through the ties between that song and “The Monarch?”

Wessels: It was based on a movie script that a friend of ours wrote. The protagonist of the story was going through some serious issues and was rather depressed. I kind of tapped into whatever I could relate to in that protagonist, and it turned into the song “Chrysalis.” It’s one of the darker ones, and it felt unresolved when we finished the song. It’s a very negative song and it ends on a negative note as well. I always like there to be some spark of positivity. So when we worked on “The Monarch” I actually felt like offering that resolution through the lyrics. When I looked at my own experience that I used to tap into that character, I feel like that part of myself has kind of transformed over the years, so I wanted to use that and use the idea of transformation and growing out of a situation like that, and not have that depressing vibe be unresolved. So that’s how they connect to each other.

Dead Rhetoric: What’s next for the band once the US tour is over?

Wessels: We go back into writing mode for the next album and we’ve got summer festivals coming up. We also have a short, special European tour with Marco Hietala from Nightwish as well. Then there are some new touring plans that we can’t talk about yet…so no rest for the wicked. We’ll just keep going full-force.