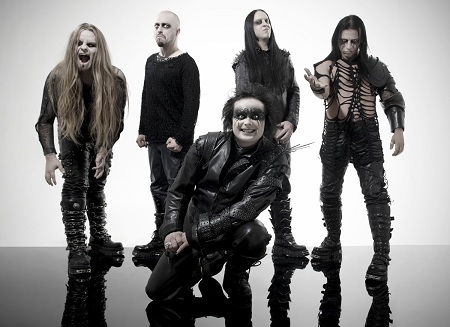 As ubiquitous (and verbose) as Cradle of Filth frontman Dani Filth is, the man that makes the wheels turn is guitarist Paul Allender. Since re-joining the band in 2000 after a six-year hiatus, Allender has steered COF into its most prolific period to date, including some of the band’s strongest albums, including 2003’s Damnation And A Day and 2004’s Nymphetamine. The guitarist has taken the band out of its quasi (and controversial) Gothic black metal era, and into a full-bodied, thrash-addled dark metal ensemble that in spite of the relative tepid nature of its newest Darkly, Darkly Venus Aversa, is still capable of the occasional hair-rising moment.

We snagged Allender on the tail-end of Cradle’s US tour with Nachtmystium, Turisas, and Daniel Lioneye. If our chat with the affable Brit proved anything, it’s that Allender is more driven than anyone could imagine, and is directly responsible for righting the once-tumultuous ship that was Cradle of Filth…

Blistering.com: How is the tour going? You’ve done a lot of work in the North American market since you re-joined the band, so are you starting to see the cumulative effect of all that work in terms of seeing younger people at shows?

Paul Allender: Going well, actually. Really well, and we’re getting on great with the support bands. We’re seeing lots of younger faces. Which is fucking great. There’s all sorts of age gaps that we’re seeing now. The last couple of shows I’ve noticed a seriously large amount of young people up at the front, so I’m like, “Wow, that’s different!” [laughs] It’s good.

Blistering.com: Given that you have so many studio albums under your belt at this stage, how much hair-pulling do you do when putting together a setlist?

Allender: It’s really quite difficult. At the end of day, we have to meet our curfews. If it weren’t for the curfews, we could at least play two tracks from each of the albums, which would keep everyone happy. Unfortunately, that’s longer than 90 minutes, so we have to work around it. We have typical favorites like “Her Ghost In the Fog,” “From the Cradle to Enslave” and “Dusk From Her Embrace.” There’s all sorts of songs we want to play, but we can’t because of the curfews. We want to play as much as we can and people are always like, “I want this! I want that! I want this!” Well, we do too, and there’s the people that want to hear the general favorites, so we have to put those in to keep those people happy.

Blistering.com: Compared to when the band first started touring actively in the States, your sound has improved dramatically. How does the band match up now compared to the lineup when you re-joined?

Allender: Ten years ago we sounded…it was sloppy as hell. It was. I’ve been here for ten years, and we’ve realized a lot of things, so in that ten-year span, we realized how things are supposed to go. Back then, it was seriously fucking ridiculous…we had to tighten things up. That was what we had to do. The band right now, is seriously fucking tight right now. We all know how to play our instruments and the material is easier to pull off.

Blistering.com: Speaking of which, James [McIllroy, guitars] seems to be a good complement to your playing. He seems to fit better than some of the guys you had in the past.

Allender: Charles [Hedger, ex-guitars] was all over the place. He’d come in on some places and wouldn’t on other places, so we’d have to meet in the middle. James is completely different to my style and that’s why it works so well. When we had Charles, we had the same style, so it sounded weird. Well, not weird, but it sounded…it was hard to differentiate. James has fucking pedals coming out of his ears [laughs] and myself, I don’t use any pedals at all. Problem solved. We have completely different styles, but in the end, we do work really well together.

Blistering.com: As for the new album, where does this one rank for you, in the Cradle discography?

Allender: I’ve got a lot of compliments about this album saying how it’s likeMidian. It sounds like Cradle still has some more left in them…we still haven’t done our ultimate fucking album yet. You can hear that it’s starting to come to that.

Blistering.com: That was my next comment – I do hear Midian a lot.

Allender: There were some overtones there, yes. We did the music, so Dani can get the feel of where it’s going and so he took it from there.

Blistering.com: I spoke with Dani for the last album and he ranted and raved about Martin [Škaroupka]. From your standpoint, what kind of things has he brought to the table for Cradle?

Allender: There’s nothing worse than playing with a drummer that isn’t tight. It’s like wading through fucking custard [laughs]. With Martin, he’s absolutely on the dot everytime. I know for a fact that I can get up onstage and play exactly what I want and he’ll nail it everytime. And that’s really important. He listens to the guitars, and he’s a trained keyboard player. He does his own orchestration, so he listens to the guitar riffs and basically plays them on the drums. He emphasizes every single bit, so everything gels together really well. It’s really easy to write material with him.

Blistering.com: He has some pretty cool parts on the new album, like on “The Nun With the Astral Habit.” He probably doesn’t need much pushing in the studio, does he?

Allender: He pushes himself quite a bit. There’s never been a time where it’s been like, “Do that. Do that again. Let’s try it again.” If it’s not perfect for him, he wants to do it again. He pretty much does most of his drum takes in one go anyhow, so it’s so much easier in the studio.

Blistering.com: Since you re-joined, you’ve managed to spit out quite a bit material in a short amount of time. Where do you think this prolific nature has come from?

Allender: It’s sheer want. I want to write the best stuff I possibly can, so I want to have riffs [on the album] that I know will send shivers down my spine and I can picture us playing them onstage and seeing kids get into them.

Blistering.com: Do ever run out of riffs?

Allender: No! [laughs]. That’s what metal is all about – the riffs. Everything I’ve ever written, I’ve ended up using. People say, “You should use this even if it’s ‘okay.’” And I’d never do that. If it’s crap, I delete them. Everything I write, I make sure it’s spot-on perfect and it gets used.

Blistering.com: You’re primarily a rhythm guy, so in lieu of the crazy solos and flashy playing we’re so used to seeing, do you think that aspect is overlooked?

Allender: I’m so sick of all that shit, to be honest. You can get the best player in the world, who can shred and everything else, who is technically brilliant, but they can’t write a song worth a shit. You know? You will find that with a lot of players. YouTube is smothered like tons of players like that. Anyone can do it. Anyone can shred. It takes about 20 minutes or two years to learn how to do it. Anybody can sit down and practice and do it, but not everyone can sit down and write songs.

Blistering.com: Let’s backtrack to the time when you left before the release of Dusk and Her Embrace. Did you think you’d ever re-join?

Allender: To be honest, I had no intentions of coming back whatsoever. I had a weird feeling in the back of my head that I knew I’d always be back. There was something there, everyday, telling me I’d back in the band one day. I did a band called The Blood Divine [with Darren White from Anathema], then I started a band called Primary Slave, which was like Fear Factory, Strapping Young Lad, but with hardcore techno samples instead of keyboards, and we got signed right away. But as soon as I was signing the contract for Primary Slave, Dani called me up and work at said, “Can we get together? I want to talk about having you back in the band.” We hadn’t spoken for four years and he phones me up…I was like, “What the fuck are you doing?” [laughs]

Allender: It was weird, because members at the time, the band was going through a lot of changes. When I got back, it was me Robin [Eaglestone, ex-bass], and Dani. Then Adrian [Erlandsson, ex-drums] joined, and we pulled the band back together. To be honest, the writing process at the time was chaotic. I was surprised they got anything done, to be honest. The way I was writing with Primary Slave was in my studio, so I had demos. Full demos, properly produced, ready to go, demos. When I got back into Cradle, I said, “No, no, no. This can’t happen.” There’s no proper way of doing work. So I went home, and said, “Look, I’m going to go away for a couple of days and come back with some stuff.” I went home and came back with ten songs. Drums, keys, everything, and said, “This is the way it needs to go. If we want to survive, this is the way it has to go.”

We managed to reinvent the whole songwriting process. No more wasting time in the rehearsal room trying to come up with stuff, staring at the floor. I managed to kick everyone in the ass and get everything thinking that for every second we’re alive, we need to be fucking working. It’s worked really, really well.

Blistering.com: You’re not getting any younger [Allender is 40], so do you foresee yourself doing this for much longer?

Allender: The only time I’m stopping is when I’m dead [laughs]. Music, artwork, everything. It’s all full-on.

Blistering.com: What’s the word on the orchestral project coming up?

Allender: Yeah, we’ve done it already. I’m not sure when it’s going to come out, as it’s for the label to decide. We have the new one to focus on, for obvious reasons. From this tour, the soundtrack music we’re using is from that album, so it’s really bombastic and sounds great.