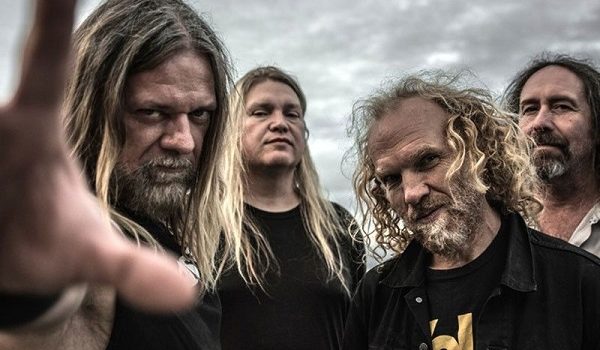 Corrosion of Conformity’s winter 2019 North American run is now in the books, yet another successful tour for a band, who, since the 2014 return of vocalist/guitarist Pepper Keenan, has basically lived there. C.O.C. occupies a unique place in the metal scene, a band with a defined legacy, but seemingly with plenty more hills to climb. Last year’s No Cross No Crown studio album proved as such, with the band’s stalwart southern metal swag still in tow, along with the perfunctory Sabbath swing. It’s proof that C.O.C.’s sound has yet to age, probably because it’s never been in style, no matter the unwavering influence of their golden Blind, Deliverance and Wiseblood studio albums.

Stationed on the band’s bus while catching glimpses of his beloved Carolina Hurricanes, bassist and one-time vocalist Mike Dean was all too kind to chat about the current state of C.O.C., waxing on their latest studio opus as well as Blind and Deliverance, not to mention, what lies ahead…

Mike Dean: Pretty good. It’s a strong bill. We’re selling some stuff out and playing some smaller places making sure [we get people in].

Dead Rhetoric How are the newer songs from No Cross No Crown integrating with the old ones?

Dean: They integrate pretty well, but to be truthful, we’re not playing as many as I would hope. But, we have three that go through the rotation and we’re playing two of them tonight. There’s a lot of stuff left on the table. We’re just getting around to playing a lot of stuff on In the Arms of God. I dig it. There’s a bunch of good stuff on there. We’re playing a bunch of stuff off that and a couple off No Cross No Crown as well as Deliverance and Wiseblood.

Dead Rhetoric What’s the first thing you think of about the In the Arms of God era? It’s the last with Pepper before your break and Stanton Moore drums on it.

Dean: To me, that was one of the best ones that was the most creative kind of time and we were real hands-on with it. We did a lot of it in New Orleans and Raleigh. I just thought lyrically the ideas were still there and everybody contributed with the songwriting, the riffs and stuff and just Stanton kind of coming in and doing his thing. We kind of tweaked the writing a little bit to feature what he did and kind of pushed us a little bit. Yeah, that’s one of my favorite ones. It just felt really creative. We started to tour on it and Stanton had a lot other — he plays in the band Galactic and the Stanton Moore Trio and Garage A Trois. He made a few shows, but we had another friend of ours, Jason Patterson out of Raleigh, play with us. He played with Cry of Love, who was a throwback band who sounded a lot like Free. They were on Sony and didn’t do anything, but it was super-quality stuff. He kind of stepped in and played with us and we were doing really well. The whole Hurricane Katrina thing happened and the guys in Down and rallied and came back to do a record because it was just the time where their story was happening. We didn’t do quite as much touring on that as we thought we should. We’re always thinking we were going to pick it up right there with that record, then Down got going strong, then we did the three-piece rather than wait around. When we got back to it, that was how many years later, that was when we started picking it back up.

Dead Rhetoric: Since Pepper returned, what has been the biggest takeaway for you?

Dean: Well, I mean, it increases the audience because people are more familiar with that material. It just kicks it up a couple of notches and the other thing is, when you have two guitars, there’s more interplay, there’s more harmonic complexity, there’s a little more girth. As a bassist, there’s maybe less stuff that you want to do. You just make it all fit together, but yeah, it’s a cool thing.

Dead Rhetoric: No Cross No Crown has been out for over a year now. You mentioned wanting to play more songs off it, so that must be a good thing, right?

Dean: I like it. I knew it was turning out good and that just confirmed it over time. Yeah, I thought it was a good statement. I’d like to get to work on another one to kind of build on that sooner rather than later because it was so strong. There’s always stuff being thrown around. We hadn’t really gotten together seriously in earnest to work on anything like that yet.

Dead Rhetoric: You’ve worked with (producer) John Custer for so long. Has there ever been a time where you thought the relationship was getting stale?

Dean: We don’t do records every 11 months or something like that. No, when we get together there’s a timeline and an expectation and we’re just kind of “Whatever it takes.” Everybody shares the urgency and the commitment to what we think is quality.

Dead Rhetoric: Bands of your career length now face the problem that fans now don’t care about their newer material. However, it seems like there was genuine interest in No Cross No Crown. Does that help push things along?

Dean: Yeah, I think we’re pretty good at what we do. People still recognize that it’s not just us old bastards. It’s hard to say. It’s like we do the same old thing every time. There’s a common thread through all the material from start until now if you look closely, but yet it covers a lot of stylistic grounds, so I think there’s always a few surprises and I think it makes people have anticipation for it.

Dead Rhetoric: Deliverance hits 25 years this year. You came back into the band for this album, so, what do you remember most about that point in time?

Dean: I kind of got stale on things at the end of our early period of doing the hardcore/punk kind of metal crossover thing. There weren’t a lot of financial rewards; it was pretty hard. I decided to do something else. I was living in Philadelphia and I was a bike messenger. I saw this record Blind by C.O.C. I never saw them with Karl [Agell] singing or Pepper in the band and I wasn’t expecting that much, but all the kind of classic rock elements we used to drive around and listen to in the van but not fully incorporate into our sound, it was all there. I was like, “How did they pull this off? Ah, produced by John Custer.” I said ‘This is probably the best record so far.” I followed that and I had other bands playing out and we’d play some shows with them and I got to know Karl and I already knew Phil [Swisher, bass]. I was friends with everybody in the band. When they had their schism with Karl getting ousted for not really turning around songwriting ideas or lyrics for what they were working on fast enough, Phil kind of quit in protest. They were down a vocalist and bass player. I just heard from a friend they were looking for somebody and I got in touch. We went to work on it and they still didn’t know who was going to sing for them. One of my favorite songs on Blind is “Vote with a Bullet.” He [Keenan] had to be thinking he wanted to do it.

Dead Rhetoric: Would you have done it?

Dean: Nah. I would have needed to prove myself at the time; it wasn’t on the table. They solicited demo material — they put ads in weekly newspapers like L.A. Rocker, all these defunct weeklies that used to exist. They had five cardboard boxes of demo tapes and CDs and photographs of hair rock band-looking photos of people who were desperate to be a famous rock singer for a band that was signed to Relativity. I was like [to Keenan] “No, dude. You do it!”

Dead Rhetoric: Is there a part of you who wishes you were on Blind?

Dean: No, no. There’s no room for that. That lineup was fucking cool. They did their thing. I got enough things that I’m proud of. [Laughs]

Dead Rhetoric: The “classic” lineup of you, Pepper, Woody (Weatherman, guitar) and Reed (Mullin, drums), what was the original chemistry like? Did you know it would work right away?

Dean: Absolutely. There’s things that could sabotage it, like the day Kurt Cobain [Nirvana] died. We heard that the record label that we were signed to got bought up by Sony and our record was going to be on Columbia. If you thought shit like that was for free, like being on a major label, you let it go to your head and it will make you worried or whatever. The stakes are high, but it’s all pretty imaginary anyway. I think we managed to not be vibed out by that. We enjoyed the ride while we had it. It was like “Alright, you’re playing rock music with a super hard edge and you’re on Mariah Carey’s label. That’s not going to last forever. Let’s get them to send us to Electric Lady Studio. Let’s get them to send us to Criteria Studios. Let’s work this to our advantage to where it will make an impact and we can learn some shit.” They even signed The Obsessed at that time. They put out The Church Within.

Dead Rhetoric: What makes Deliverance hold up so well over time?

Dean: It’s got elements…it stumbles upon the classic, timeless elements of heavy rock songwriting. There’s not much there that dates it as 1994. It never sounds current, but it never sounds out of style. It’s like a classic thing. That approach has been a real touchstone to where we don’t bother being in style because it’s just going to sound really dated really fast. It has remained timeless; it’s a little bit of anachronism but in a fresh way.

Dead Rhetoric: Think about where C.O.C. sat at the time — right between grunge and the groove metal bands like Pantera and Sepultura. That made a difference, too.

Dean: Yeah, with some hardcore influences. We were like the Aztecs when they used to conquer all the neighboring civilizations and appropriate their mythologies and bring it back into their pantheon of culture. We kind of ran over everything we heard and incorporated it and did it in a way that wasn’t derivative, but reverent, but still somewhat original.

Dean: The rent is due every month so we like to pay it by playing music. We’re going to go out and work some more while it’s fun. I think we’re going to do some cool festivals in Europe this summer and we’re just looking for what our next North American run is going to be. Hopefully, we’ll have a little discussion on when we might get started on another recording for Nuclear Blast.